Why No Big Blogospheric Libel Suits? 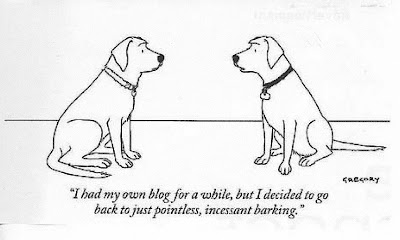 Glenn Reynolds, whose Instapundit is one of the most read one-person blogs anywhere, also teaches law at the University of Tennessee. He has published a paper in the Washington Law Review titled "Libel in the Blogosphere: Some Preliminary Thoughts" that is a must-read for any blogger who is interested in more than just pointless, incessant barking.

I also find that pretty interesting as someone who was a defendant in several libel cases against newspapers (all but one dismissed or withdrawn, with one hung jury) and burned the midnight oil many a time editing investigative pieces so they passed libel muster.

No major libel case has emerged since the advent of the blogosphere.

Blumenthal v. Drudge, in which Sidney Blumenthal went after Matt Drudge of the Drudge Report for writing that the political journalist had beaten his wife, is the closest example because of its portentious first-amendment issues. Drudge later retracted the report and apologized, but Blumenthal filed a $30 million libel suit. He later claimed that he was forced to drop the suit because he could not afford the cost of litigation.

*The exposure of bloggers is further limited because they usually blog about public figures and, as is the case with more traditional media, malice with reckless disregard for the truth would have to be proved.

* Blog culture itself frowns on libel suits. Blogging economist Donald Luskin, for example, threatened to sue then-anonymous blogger "Atrios," who has since self-unmasked himself. Luskin withdrew his threat under pressure from other bloggers.

Reynolds says this is probably unwise because big-media organizations are becoming more like blogs all the time.


Cartoon by Gregory from The New Yorker
Posted by Shaun Mullen at 5:33 AM
Email ThisBlogThis!Share to TwitterShare to FacebookShare to Pinterest