The Week That Bush Dicked Nixon 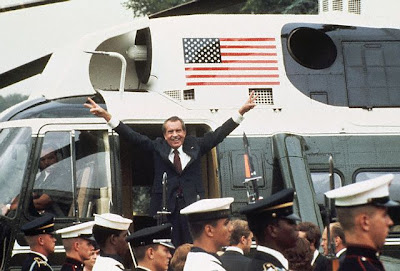 I'm fond of saying that public-opinion polls are a snapshot in time – and oh what a time we're living in.

Hell, it's only Wednesday, but the Senate Judiciary Committee has implicitly endorsed the Bush administration’s embrace of torture, the House overrode the president's veto of a popular water projects measure and approved a bill to pay for veterans' and programs despite a veto threat, 2007 was officially recorded as the deadliest year for American troops in Iraq, a candidate that almost no one has heard of raised $4.2 million in campaign cash online, and Pakistani goon squads sent into the streets by the prez's favorite dictator are beating up on lawyers.

But the really big news is that George Bush finally has unseated Richard Nixon as the most unpopular president in the history of the poll.

The latest USA Today/Gallup survey finds Bush with a 31 percent approval rating -- and for the first time ever in the polling history, 50 percent say they "strongly disapprove" of a president.

The previous high – or is it a low? – was a 48 percent strong disapproval rating for Nixon at the height of the Watergate scandal in 1974.

Posted by Shaun Mullen at 7:13 AM
Email ThisBlogThis!Share to TwitterShare to FacebookShare to Pinterest