One Strategy Fits All. (Not) 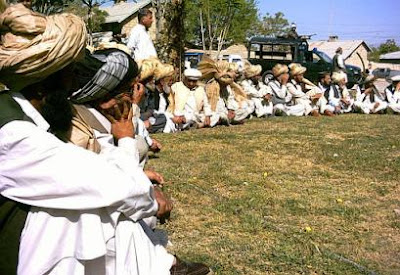 As noted in the post above, the success of the Anbar Awakening is relative and whether it works in the longer term as well as eventually enable a drawdown of forces in is an open question.

But this has not prevented the White House from considering funding and arming Pashtun tribes to push back against the Taliban and Al Qaeda in the northwestern region of Pakistan, which under the benevolent gaze of Pakistani President Pervez Musharraf has become a sanctuary for the very terrorists that the chronically starved U.S.-NATO effort in Afghanistan was supposed to eradicate or at the very least control.

Military affairs blogger Bill Roggio, writing in The Weekly Standard, says that the plan is being promoted as somewhat analogous to the Anbar effort.

"The conflicts in 's Anbar province and 's tribal areas are fundamentally different, and while both provinces are dominated by a strong tribal culture, Al Qaeda's draws support in each for different reasons. In Anbar, the tribes and insurgent groups aligned themselves with Al Qaeda in largely because they viewed Al Qaeda as an ally in the fight against American occupation. However, they turned on the terror group once it became clear that Al Qaeda threatened their very existence. In , the Pashtun tribes have by and large openly supported the Taliban and al Qaeda since the groups first formed. The Taliban, with the help of the Pakistan Inter Services Intelligence agency, was born in the Pashtun tribal belts, and Al Qaeda fighters and its senior commanders are welcomed among the Taliban supporting tribes there."

Roggio further notes that the counterinsurgency campaign proposed for is not at all similar to that executed in Anbar, where the tribes fought Al Qaeda of their own accord before seeking help from the