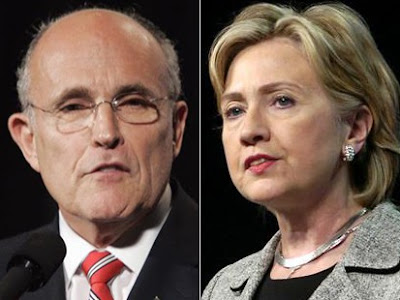 As I noted the other day, there is an epidemic of lazy thinking abroad in the land with too many politicians, pundits and bloggers pretty much giving the White House a free pass because of the dopey notion that everything will be better with a new president.

This attitude is astonishingly short sighted when one considers that if the 2008 election was held tomorrow, in all likelihood the winner would be either Hillary Clinton or Rudy Giuliani. This raises the prospect that the successor to the lousiest president since forever might be as bad – or at the very least neither a break from the past nor a great improvement.

The more we learn about Giuliani, the scarier he is.

There are his ample personal shortcomings, including being an admitted adulterer, which brings up the possibility that he could become the first president to have broken the news to his wife that he was getting a divorce at a press conference.

The Family Values party is so desperate to hang onto power that dirt like this hardly makes a ripple these days, let alone Giuliani’s previous support for abortion, gay rights and strict gun control. No less righteous a personage than the Reverend Pat Robertson has welcomed Giuliani into his slimy embrace, and other right-wing Christianists of note are said to be getting ready to line up behind him, as well.

Then there are Giuliani's claims that as ’s Mayor he made safer and was a heroic leader in the wake on the 9/11 attacks on the .

He is absolutely correct about the former and deserves credit. But he has been a demonstrable liar about the latter, and his claims that he spent more time at Ground Zero than rescue and clean-up workers are obscene.

Then there is the company that Giuliani keeps and his predilection, like President Bush, for valuing sycophancy above all while overlooking disturbing information and inconvenient questions when they pertain to the people loyal to him.

Exhibit A in this regard is, of course, Bernard Kerik, whose legal entanglements are sure to provide background music for the Giuliani campaign for months to come despite the effort of his supporters to drown out this dirge. The only question here is whether Kerik will be able to attend a Giuliani inauguration, if there is one, or will be behind bars.

Moving right along, there is perhaps the most frightening aspect of Giuliani: A warmongering foreign policy predicated on bombing first and asking questions later that, if possible, is even scarier than the president's. And a foreign policy team that is even too extreme for the president.

Meanwhile, the more we see Hillary Clinton in action, the scarier she is, as well.

Giuliani certainly has done his share of flip-flopping. But 's well-documented peregrinations on the war and more recently on whether illegal immigrants should have driver's licenses cement my view that, as is typical of most politicians, she will say whatever she believes she can get away with in the service of raising campaign cash and courting voters. And what we most definitely do not need is just another political hack in the Bush postbellum.

Then there is ’s obsession with secrecy. As one scribe put it regarding her relationship with the news media: "The Bush administration changed the rules, and she likes the way they look. " The MSM, of course, is rolling over and hoping that scratches its tummy.

And while it's not quite as ballsy as FEMA putting faux reporters in the audience at a California wildfire press conference, you have to hand it to Clinton in taking a play from the Bush-Cheney playbook and having her campaign staff plant questions with audience members and then pointing out the plants to her.

I'm not troubled by charges that overcompensates for the fact she is a woman by trying to prove that she is tough. In fact, there are no gender-related issues for me except the ones that she, Mr. Clinton and her campaign staff raise themselves, the most recent iteration of which is hints that the other Democratic candidates are picking on her because of her sex. That is silly. They're picking on her because she's the frontrunner.

That noted, there is Clinton's tortured relationship with another admitted adulterer -- her husband -- and the prospect of a White House with a First Mister who is not only enormously influential in his own right but in my view is the most adept politician of modern times. Theirs certainly would not be the first presidential marriage of convenience – and there doesn't seem to be much question that this is a relationship without of a whole lotta love.

Out on the stump, says over and over that she will reverse the policies of the Bush administration, but that would not seem to apply to some biggies like the war, torture and domestic spying. And she has been maddenly unclear on World War III . . . er, .

, in fact, has been notably vague about what policies she would reverse, repeatedly falling back on the mantra that hers is a campaign of hope – until she goes negative.

Then there is the prospect of a Giuliani-Clinton race next fall.

They certainly would bring out the worst in each other at a time when the nation already is extraordinarily polarized. It will be a mudbath if not a bloodbath, and that's the last thing we need.

Don't get me wrong. The nominees inevitably will have lot of warts no matter who they are, and I can live with that. But when they remind me more of the man they seek to replace – which Giuliani and Clinton do – than someone who will boldly lead away from the excesses of the past seven years, my palms get all sweaty. Yours should, too.

"Giuliani, a short man looking for a balcony."
I heard this the other day. It's both funny and food for thought.