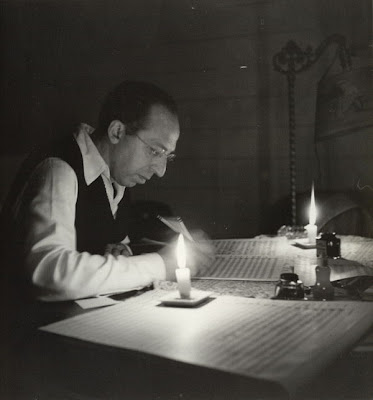 Copland composes by candlelight in his Berkshires cabin (1946)
The great American composer Aaron Copland probably did more than anyone to liberate classical music from its European roots.

As a classically-trained composer, Copland’s embrace of popular music was not unprecedented, but the way that he integrated folk music and jazz into his compositions certainly was. No matter how often I hear his Pulitzer Prize-winning scores from Agnes DeMille's “Rodeo" (1942) and Martha Graham's "Appalachian Spring" (1944), let alone see these ballets performed with orchestra, they seem as innovative as when they were first played and retain an extraordinary freshness.

* * * * *
Copland was born in , 107 years ago today, the child of Lithuanian Jewish parents who were shopkeepers. Although his parents never encouraged or exposed him to music, he was hooked by his mid teens and as a young adult studied composition in .

was a revelation for Copland, and it was there that he met composer Serge Koussevitsky, who asked him to write a piece for the Symphony Orchestra. "Symphony for Organ and Orchestra" (1925) was followed by "Music for the Theater" (1925) and "Piano Concerto" (1926), music which relied heavily on the jazz idioms of the day and were a bold departure from the classical music of .

In the late 1920s, Copland moved away from jazz and concentrated on a new form of American symphonic music. Along with friend Roger Sessions, he initiated the Copland-Sessions series, which was dedicated to presenting the works of young composers, and in 1932 he presented the first Yaddo Festival of American Music.

Copland began his most productive and popular years in 1935 with "El Salón México," which was rooted in Mexican folk music and was his first widely acclaimed composition.

"Fanfare for the Common Man," the main theme of the fourth movement of his Third Symphony, is perhaps Copland's most famous work. It was written in 1942 and later would be used to open several Democratic National Conventions. Later the same year, he wrote the popular "A Lincoln Portrait."

(Copland had defended the American Communist Party during the 1936 presidential election and as a result was blacklisted during the Red scare of the 1950s. Because of the political climate of that era, "A Lincoln Portrait" was withdrawn from the 1953 inaugural concert for President Eisenhower.)

Copland, ever striving to reach a wider audience, began composing for ballet and movies.

Among his most popular film scores are those for "Of Mice and Men" (1939) and "Our Town" (1940). His compositions for DeMille and Graham followed, and "Hoe-Down" from DeMille's "Rodeo" is among the best known compositions by any American composer, having been used numerous times in movie and television scores. "The Heiress" (1949) won him an Academy Award for best score.

* * * * *
Copland achieved a balance between classical and American styles with percussive orchestration, changing meter, polyrhythms and especially the slowly changing harmonies in many of his works, notably "Appalachian Spring," that evoke the vast American landscape. He greatly admired Igor Stravinsky, and there are allusions to Stravinsky's use of rhythm and unmistakable vitality in many of his works.

Beginning in the 1950s, Copland composed less but began conducting more and toured the world conducting live performances of his and others' works. He also lectured widely. By the time he conducted his last symphony in 1983 he had stopped writing altogether.

He died in 1990 at age 90, and his music is often performed. Friend and protégé Leonard Bernstein was deeply influenced by Copland and was considered the finest conductor of his works.

This is another in a series of appreciations of the people who have moved and inspired me over the years. It is based in part on the Wikipedia entry on Copland.