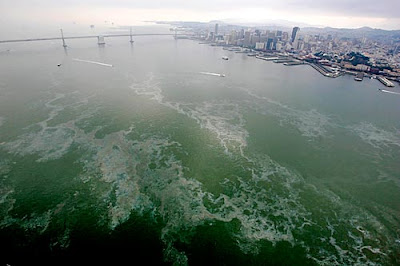 OIL SLICK SPREADS OUT ALONG SAN FRANCISCO BAY
It wasn't a dirty bomb attack or hijacking, but the federal response to an oil spill in San Francisco Bay yet again begs the question: Six years after the 9/11 attacks, is the U.S. prepared for another big one?


Judging from the lethargic reaction of the Coast Guard and other federal agencies to a 58,000-gallon spill of heavy bunker fuel from the container ship Cosco Busan last Wednesday after it rammed a tower, the answer is a resounding "no."

The ship hit the bridge at 8:30 a.m. The Coast Guard, which has been criticized for its cozy relationship with shipping companies despite the dangers of container ships with potentially deadly cargoes, took at face value a report from the ship's crew that only 140 gallons had spilled.

It wasn't until 4:49 p.m. that Coast Guard investigators realized the true extent of the spill and not until 9 p.m. that they issued a public advisory about the spill’s magnitude.

By that time, the oil had spread to beaches all along the waterfront and was surging out the . In the days that followed, the oil fouled a 40-mile stretch of shoreline, contaminating over 20 beaches in the region, including the pristine Point Reyes National Seashore. Hundreds of birds have been killed or injured.

It is small comfort that the amount the spill was comparatively minor. Some 11 million gallons of crude oil were spilled in the 1989 Exxon disaster in .

Meanwhile, there also are questions as to whether the slow response was because the Coast Guard has shifted its post-9/11 emphasis more toward port and coastal protection duties than marine safety and environmental response.

The Coast Guard’s excuse-making in response to the criticism is not comforting, especially when you substitute oil spill with a phrase like undetonated terorist bomb.

Rear Admiral Craig Bone acknowledged that word got out to the public too slowly. But he noted that several skimmer boats - crafts that can mop oil off water - were on the spill scene within hours.

Admiral Thad Allen, the Coast Guard commandant, said the delays in reporting the size of the spill were "errors of omission rather than errors of commission."

The cleanup is expected to take a month or more to complete. The last big spill in the bay - 40,000 gallons of heavy fuel dumped in 1996 by the cargo ship Cape Mohican - took at least two years to mop up.

Photograph by Eric Reisberg/The Associated Press
Posted by Shaun Mullen at 6:00 AM
Email ThisBlogThis!Share to TwitterShare to FacebookShare to Pinterest