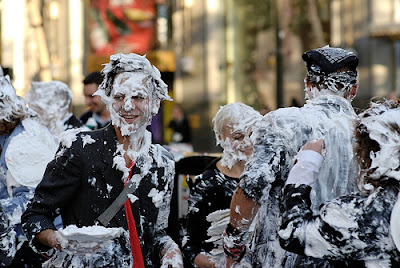 ONLY IN SAN FRANCISCO. MORE HERE.

Since the Bush right insists that (Reverend Pat) Robertson is completely irrelevant to the current GOP, I have no idea why they are fixated by his endorsement of (Rudy) Giuliani. For me, however, it seals the deal. Robertson blamed Americans for causing 9/11. He is a charlatan and a religious phony. He has enriched himself at the expense of millions of gullible Christians who did not understand that this man's sole principle is his own power and wealth. It doesn't surprise me that he sees eye to eye with Giuliani. They are very similar characters. But he does represent what may be becoming the consensus among Christianists: that the war on Islamic terrorism is the prime issue; and that the way to tackle it is by increasing military aggression, bombing or occupying Muslim countries, preserving solely to hasten the Apocalypse, and entrenching torture as a pillar of American national security policy. The fusion of Giuliani's authoritarianism with Robertson's Christianism is indeed one future path for the GOP. It is enlightening to me to witness two very similar politicians sink their differences to forge that new, fascistic direction.

All those terms that conservatives used to love to use, the proud, patriotic words like Honor, Decency, Honesty, Morality no longer apply to them. The right-wing relativists have faced their own ultimate test and they have failed it in every possible way.

The headline with an article on Saturday about Senator Hillary Rodham Clinton’s campaign and the issue of treating women and men equally in presidential politics overstated Senator Clinton’s response to suggestions that she had been using her gender as a shield against criticism from her male opponents. Mrs. Clinton said her rivals were “picking on” her because she was winning, not because she was a woman. She then went on to say: “I anticipate it’s going to get even hotter — and if you can’t stand the heat, get out of the kitchen. And I’m very much at home in the kitchen.” Mrs. Clinton did not “retreat” on issues of men versus women.

A month ago, congressional Republicans quietly announced that there were crafting a comeback plan, which would get the party back on track. It would include new attacks on Dems, a new GOP policy agenda, and a series of new bills. The whole package was going to be awesome.

To be sure, the party needs something. The GOP’s House committee has $1.6 million in the bank, but is $4 million in debt. The polls look one-sided in the Dems’ favor. Yesterday's election results offered very little good news. The party has struggled to stop retirements and recruit favored candidates. . . .

And now, the comeback plan is off to a troubled start, because the party doesn’t know where it wants to go.

Several smart correspondents have made the point that one of the other oddities of western press coverage of Benazir Bhutto is that you tend not to hear about how she's a huge crook. Corruption in a middle-income country, of course, is nothing new and in general is not a paragon of good governance. Still, the best of my knowledge Bhutto and her husband stand out as unusually corrupt by Pakistani standards, which is precisely how she wound up ejected from power.

A study of more than 5,000 youngsters in has found those who smoked marijuana do as well or better in some areas as those who don't, researchers said.

But the same was not true for those who used both tobacco and marijuana, who tended to be heavier users of the drug, said the report from Dr. J.C. Suris and colleagues at the .

The study did not confirm the hypothesis that those who abstained from marijuana and tobacco functioned better overall, the authors said.

In fact, those who used only marijuana were "more socially driven ... significantly more likely to practice sports and they have a better relationship with their peers" than abstainers, it said.