The U.S., Iraq & Empire Building (Or: When A War Becomes a Business Deal) 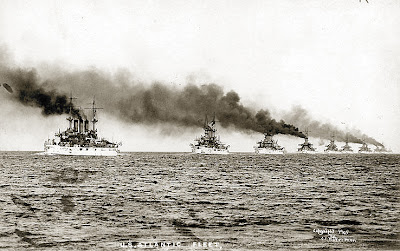 War is just a racket. A racket is best described, I believe, as something that is not what it seems to the majority of people. Only a small inside group knows what it is about. It is conducted for the benefit of the very few at the expense of the masses.

There inevitably are charges of American empire building in the wake of the sweetheart deal between the and under which the government gets a long-term nanny in the form of troops stationed at permanent bases and the gets first dibs at s riches, which is to say its vast untapped oil reserves.

Jonah Goldberg and Ed Morrissey, among other leading conservative lights, argue that just because is the leader of the free word does not make this a case of empire building.

They're absolutely right. What is happening in Iraq in 2007 is different than what happened when the U.S. occupied Cuba in 1898 or annexed the Philippines at the turn of the 20th century, or during the Banana Wars in the 1920s when Marines intervened in Latin and South American countries to protect or advance U.S. commercial interests, typically bananas, tobacco and sugar cane.

But just because what is happening in in 2007 bears scant resemblance to those antecedents doesn't make it right.

This is lost on Captain Ed, or he chooses not to acknowledge it:

"We have fought and bled and died all over the world, but not for conquest; we have liberated lands from empire, not built our own. As Colin Powell and others have noted, the only land we required was enough to bury our dead. That hardly fits with the notion of imperialism in any real sense, and the accusation of empire insults the memory of those who lie in those graves. It's time we started to make that counterargument."

Which he does, but it's to the wrong argument. Let's proffer the right argument:

What the Bush administration has done is craft a brilliant and spectacularly amoral solution to ending the Iraq war.

It can claim that it will only stick around as long as the Iraqis want us knowing full well that the Shiite-dominated, benchmarked-impaired, democracy-deficient Al-Maliki regime is willing to barter Iraq's oil riches for long-term coup insurance.

This keeps U.S. boots on the ground indefinitely and the wells pumping for Big Oil indefinitely without congressional approval because, you see, the deal is a "strategic framework agreement" and not a treaty. Lieutenant General Douglas Lute, Bush's point man on Iraq, has said as much.

If there is a fly in the ointment, it's not whether the White House has co-opted Congress, which it has done early and often and more recently with Democratic acquiesence, it is whether Iraq's Parliament will get on board.

While the historic past of the Great White Fleet (photo) and America's other imperialist ambitions of yesteryear don't play very well in this context, the historic present does. As I wrote barely two months ago when Iraq was still a war and not a business deal that would make a crony capitalist blush, there are three different groups of Americans:

*The vast majority who just want Iraq to go away and are literally and figuratively shopping at the mall. These are the people that the White House has counted on and they've come through spectacularly.

The small but vocal minority like the Goldbergs and Morrisseys for whom the war started in January with the advent of the Surge strategy. The nearly four years between the fall of Saddam Hussein and the Surge are a blur or don't count when it comes to embracing the Bush-Al-Maliki deal.

The also small but vocal minority whose memories are not so short. We have not forgotten the non-existent WMD, the collapse of the Provisional Coalition Authority, the first battle of Falluja, the Abu Ghraib scandal, the onset of a civil war and the emergence of Al Qaeda in Mesopotamia as a result of a failed occupation, all of which go a long way to making the deal that has resulted from these disgraces such a disgrace itself.

Okay. Now lets hear the counterargument to the right argument.