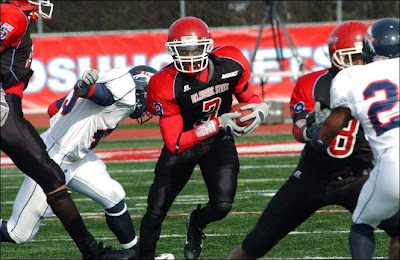 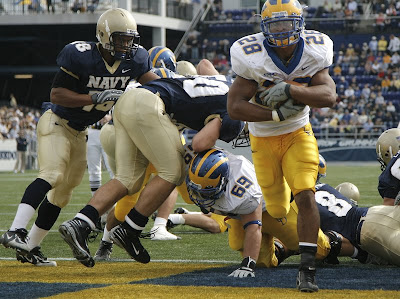 DSU (top) angles for an upset; UD for keeping championship hopes alive
It is the biggest sporting event in little Delaware since the Nanticoke tribe played the Lenni Lenape tribe in lacrosse. Or something.

Delaware is been the only state where the major universities have never played each ofther in football, but that will change today when the University of Delaware finally faces off against Delaware State University in the first round of the NCAA's Division I Football Championship Series.

UD, founded in 1743, offers over 100 majors to 19,000 students, 84 percent of whom are white, and has a distinguished faculty and excellent academic reputation. Its football team -- the Blue Hens -- is a perennial small-college power and has won six national championships and made 19 NCAA tournament appearances while consistently drawing among the largest crowds in the FCS division to a 22,000-seat stadium in Newark.

DSU, created for blacks in 1891 by a segregationist Legislature, survived decades of hostility to become a full-fledged university in 1993. It has about as third as many majors as UD. Although 40 percent of its 3,600 students are white, it is still considered a black school and academically inferior to its rival 45 miles to the north. Its football team -- the Hornets -- is appearing in post-season play for the first time and draws comparatively small crowds to a 6,800-seat stadium in Dover.

The state's tangled racial history is an inevitable backdrop to today's game, which will be televised on ESPN at 1:30 p.m. EST.

In more recent years, the reasons why that has not happened have a lot less to do with racism than arrogance and a perceived mismatch on the part of UD's athletic department and vocal season ticket holders. UD indeed plays one of the toughest schedules in the FCS while DSU plays in a considerably weaker conference, but the two schools have faced each other in other sports since 1991 and the mismatch argument does't hold water since UD regularly plays one or two other schools at DSU's competitive level in football year in and year out.

The long-festering issue came to a head earlier this fall when UD alumnus Jeff Pearlman wrote a scathing commentary at ESPN.com on UD's refusal to play DSU. That brought national attention and a welcome acknowledgement by UD football coach K.C. Keeler that the two schools should play.

That would have not happened during the regular season before 2010, but fate and the NCAA championship series selection committee intervened: UD, one of an unprecedented five teams from the Colonial Atheletic Association to earn a slot in the 16-team tournament field, backed into post-season play with an 8-3 record, including a win over big-time Navy. DSU went 10-1 and won the Mid-Eastern Athletic Conference outright to qualify.

But when the opening whistle sounds today, this long awaited match-up will be about football and not history.

UD has played many big games over the years and under other circumstances would be heavily favored to win. But this game is the biggest in DSU history, so the outcome -- and who will have big bragging rights in little Delaware -- remains to be seen.