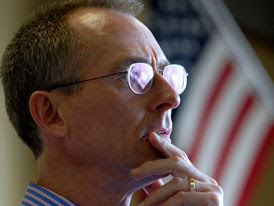 A politician knows he has a problem when his own children warn him that they might vote against him.

That is what happened to Representative Bob Inglis of , who like President Bush and most of his Republican peers has been skeptical about global warming despite mounting evidence that the planet is in crisis because of rising carbon dioxide levels and temperatures from greenhouse gases and other substantially man-made factors.

Inglis learned that the political winds might be shifting not on Capitol Hill but back home when his eldest son, Robert Jr., 22, told him that he'd better "clean up his act on the environment."

His daughter was no less blunt, while Inglis said "I have three more kids coming up — and they seem to share the same view."

The family pressure worked and Inglis traveled to and to witness first-hand the effects of global warming the effects of rising CO2 levels and temperatures.

Inglis now believes the science behind global warming, as well as the politics: Republicans, he said, will “get hammered” if they don’t confront the issue soon.

More here.
Photograph by The Associated Press
Posted by Shaun Mullen at 5:55 AM
Email ThisBlogThis!Share to TwitterShare to FacebookShare to Pinterest

The problem is that they just don't have a feel for how Science works. They think that everything is political. They don't trust scientists because most scientists are liberal and most liberals, in their minds, are so obviously mistaken about so many things that they really must be wrong on this one too. And this AGW hypothesis just seems so unlikely. So the only question they have is, Why? It must be a conspiracy to get more grants.

Quite frankly, most liberals have very little understanding of Science, either. Their comprehension of economic forces is apalling. I suspect they accept the AGW findings mostly because the conservatives are against it. I'm thinking of Ted Kennedy in particular when I say that liberals, in their hearts, are really not worried about AGW either. If they were, they would start working with the opposition to find ways to move forward.

Bush, by the way, has explicitly stated that he agrees that AGW is real and should be confronted. He has also taken the most serious steps imaginable to deal with it. His plan to help India regularize and upgrade their nuclear power capacity will, IMO, remove a tremendous potential for loose nukes and at the same time make a dramatic difference in the generation of greenhouse gases going forward.

I am suspicious that Congress will do everything it can to sabotage this effort.