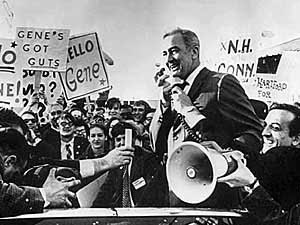 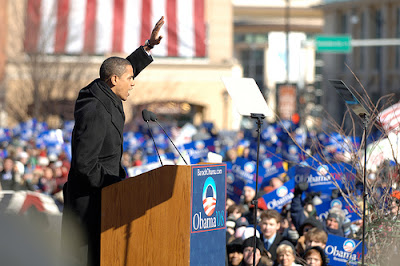 Andrew Sullivan has lobbed a grenade into the presidential campaign tent with "Good Bye to All That," his provocative and instantly famous essay on what for me is emerging as a central issue in the 2008 presidential race: Which candidates are capable of bringing new thinking to old problems, as well as dealing with all the new ones.

"A Giuliani-Clinton matchup, favored by the media elite, is a classic intragenerational struggle—with two deeply divisive and ruthless personalities ready to go to the brink. Giuliani represents that Nixonian disgust with anyone asking questions about, let alone actively protesting, a war. will always be, in the minds of so many, the young woman who gave the commencement address at , who sat in on the Nixon implosion and who once disdained baking cookies. For some, her husband will always be the draft dodger who smoked pot and wouldn't admit it. And however hard she tries, there is nothing Hillary Clinton can do about it. She and Giuliani are conscripts in their generation's war. To their respective sides, they are war heroes . . .

"The war today matters enormously. The war of the last generation? Not so much. If you are an American who yearns to finally get beyond the symbolic battles of the Boomer generation and face today’s actual problems, Obama may be your man."

With the exception of Ron Paul, the Republican wannabes are a sorry bunch in this regard, ranging from somnambulant (Thompson) to predictable (Romney) to frightening (Giuliani).

The Democratic field is only marginally better, and I have trouble escaping the feeling that is capable of being a Bush with skirts. So I keep sliding back into Obama's embrace even though I believe he could use some more seasoning.

Until I read Sullivan's essay, I couldn't quite put my finger on why Obama was so attractive, but Andrew nails it: My generation has had its chance and blew it. It's time to give the next generation a shot.

But is Barack Obama the Eugene McCarthy of the 2008 campaign?

McCarthy was not exactly a young 52 when he challenged Lyndon Johnson for the Democratic presidential nomination in 1968. (Obama is 46.) But McCarthy spoke for a younger generation in basing his campaign on his fierce opposition to the Vietnam War.


The senator from Minnesota was to give the Democratic establishment fits, and although he was viewed by the news media as a novelty, he won the New Hampshire primary. This galvanized many college students, some of whom cut their long hair and shaved off their beards when they became McCarthy campaign volunteers, which led to the slogan "Get clean for Gene."

In just one of a number of shocking events in 1968, the Vietnam War took yet another casuality when LBJ announced in March of 1968 that he would not run for re-election.

Vice President Hubert Humphrey, another Minnesotan, went on to get the nomination at the stormy Democratic National Convention in Chicago and was beaten that fall by Richard Nixon in a match-up of two Old School politicians. Nixon promised to end the war, but of course did not.

Obama's stand on the Iraq war is similar to McCarthy's on Vietnam, which is to say that they were early opponents of the conflicts who had little company in Congress.

So will Barack Obama do any better than Eugene McCarthy did? My instrincts tell me that the answer is a resounding "no."

I completely agree. Obama is a good, talented politician who is not ready for prime time. Rudy will probably be the Republican nominee. He is vicious. Obama is not up to it. He's too nice. In the end, voters will go with the fighters. Right or wrong, that's how it's gonna play out.

I'm afraid of that too. Romney got caught blatantly pandering to racists with his "Osama . . . Barack Obama, Barack Obama" comments, and Obama took the high road and responded as if it were beneath his dignity to retaliate. Which of course it is, but that's how Kerry lost the last election. There's more at stake than a candidate's desire to stay above the sleaze of a campaign. I want the Eagle Scout to be president, but I'm nervous about betting on him in the knife fight that comes first.

I'm sorry but you guys are a bunch of cowards, to say the least. Here you are living in a country where you have the ability to go out and fight for what you want and instead of doing something about it you are talking about how you like Obama but are "nervous" he isn't going to be able to handle himself in a "knife fight". Do you know what that makes you? You guys are the ones who stand back and do nothing when someone they care about gets his ass kicked.

The Howard Dean campaign last time around felt a lot more to me like the McCarthy campaign (which I worked in). It had more of the quality of quixotic challenge -- at that point other democratic candidates were still more or less supporting the war. Remember that in 1968 support for the war was the majority Democratic party position and that of the eventual candidate, Hubert Humphrey.

That said, most of the contrasts play in favor of Obama. McCarthy was *not* an exceptionally talented politician. He was a poet, a quirky loner, someone with a rather bleak vision (this became clearer in later years). He had an erudite wit, but on none of the occasions that I heard him speak did he leave a crowd more enthusiastic than before he started. Obama is a political talent not quite on a par with Bill Clinton and Ronald Reagan, but above anyone else I've seen in U.S. politics over the last 40 years. And I don't mean talent in a cheap sense, either -- I mean the ability to speak directly to the concerns and hopes of large swathes of voters, without cant or qualification.

Anyone who makes the seasoning argument should study JFK's 1960 campaign. If you want to get a sense of it rent Pennebaker's excellent 1960 documentary "Primary."

Eugene McCarthy did not win the 1968 New Hampshire primary, he got 42% of the popular vote to Johnson's 49%. I worked for McCarthy and I like Obama, but Obama is no McCarthy, who would better be compared with Howard Dean in 1968.

The comparison falls flat for the very simple reason that McCarthy was _the_ antiwar candidate of the '68 campaign. He didn't campaign on bringing America 'together.' He campaigned to take the US out of Vietnam. He defined himself with a strong, morally-informed stand on a controversial issue. Indeed, leading figures in his campaign supported him mainly in the hopes of pushing RFK to enter the race by proving the strength of the antiwar faction in the Democratic party.

Contrast that to Obama whose campaign is based upon changing the style, not the substance, of American politics. Indeed, his actual politics are almost indistinguishable from his 'establishment' rivals. His is a personality campaign. Complaining about media coverage of Obama is ridiculous: the media have made him out to be the second coming ever since his speech at the 2004 Democratic Party convention.

Obama is an interesting young politician. It remains to be seen if he has the stomach for politics at this level. What I'm seeing so far is not encouraging. I honestly don't believe that the Republicans will go with Giuliani. He's just too much for them to swallow. They are in a bind, though.

As will be seen, it is not Obama, but Ron Paul who is the New Gene McCarthy, as well as being the New Barry Goldwater, only he will be more successful (at getting elected) than Goldwater, McCarthy, or Obama.

tablet pc android said...
This comment has been removed by a blog administrator.
3:50 PM