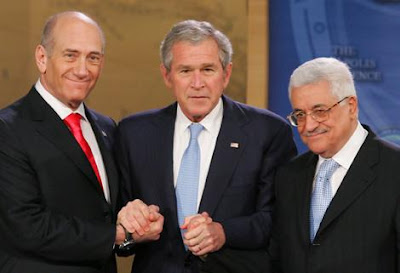 I sat and watched Bush's opening speech at the Annapolis Conference . . . Let me tell you: pundits aren't the only ones predicting that nothing serious is going to be accomplished. Bush himself pushed the expectations so low that, by all accounts, the fact that Abbas and Olmert were in the same room means that it could already be counted as a success. How low did he place the bar? Pretty damn low.

This is Bush's bash. His name is on the invitation. The party is at his place. The guests are strictly A-list. Every country that matters, and a lot that don't, will be represented. The European Union, the United Nations and the Arab League will be there too. They are all coming for the same reason: They have been summoned by the one man in the world to whom no one wants to say no.

It turns out that Bush, far from wrecking 's prestige and influence, has compounded it. Every government in the world knows that attending the conference under the aegis of the president of the is an unmistakable acknowledgment that remains the world's indispensable state. . . .

Despite the assurances of Senate Majority Leader Harry Reid and House Speaker Nancy Pelosi, the has not been humiliated in . On the contrary, the overthrow of Saddam Hussein and the subsequent determination of the American occupation have concentrated the minds of the (ever fewer) anti-American Arab despots.

It is fitting Secretary of State Condoleezza Rice chose the U.S. Naval Academy for the venue of today's so-called peace conference. The reputation of that extraordinary institution in has been sullied in recent years by a succession of rapes of young women.

Despite official efforts to low-ball its significance, Miss Rice's conclave is shaping up to be a gang-rape of a nation on a scale not seen since in 1938, when the British and French allowed Adolf Hitler and Benito Mussolini to have their violent way with .

The Palestinians are the cause of exiting and ex-presidents. There's no electoral payback in supporting them. Jews and Israel-loving evangelicals dwarf any Arab lobby to the extent it’s not even funny.

President Bush is on the exit track. It’s time to rectify the fundamental error he made in allowing war-on-terror rhetoric to discredit the Palestinian national movement. . . .

In seven years in office, Bush has been uninterested in such an ending. He hallucinated about roads from to . He talked about two states and lost interest. American Middle East policy has been distracted and unbalanced.

Now, overcoming his angst, Bush has summoned the parties to It's late in the day. The rising Middle Eastern power, , has not been invited. Nor has Hamas. What’s present in abundance is desperation. Bush must use it.

The Palestinians are desperate because they are at a dead end. They've been the losers over six decades through ineptitude, corruption, Arab hypocrisy and their susceptibility to victims' hollow consolations.