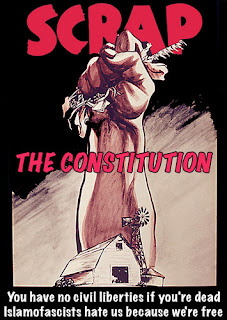 Out of the car, longhair!

That phrase still makes me cringe. Although my hair is short and gray, I still remember when hair not much longer than President Carter later wore in the White House could get you into trouble and sometimes big trouble. In the day of H.R. Haldeman style brush cuts, hair was the enemy of the state and righteous right wing Republicans for social conformity were all for establishing legal limits for male hair length. Even Disney refused entry into fantasy parks to anyone whose hair suggested psychedelic subversiveness. It wasn't even an infrequent thing for a young business executive in a brand new 1969 Brooks Brothers suit and neatly trimmed moustache to be sneered and snickered at and told to "get a job" while walking down Chicago's LaSalle Street.

That was then. Today it's about young slackers wearing enormous clown pants so low their butt cracks and boxer shorts peek nauseatingly at anyone following in their wake. Of course such sartorial protests against conformity are in themselves an equal and opposite conformity and yet advocates of each polarity never seem to understand the futility. Yes, this affectation has already lasted longer than hippie hair or tail fins or Nehru shirts or shoulder pads and seems to be associated more with sociopathic criminality than with hallucinatory enlightenment and world peace, but the is moving inexorably toward a rabble-driven culture. Language, music and clothing are all part of it. Wearing your hat backwards or exposing your ass to sunburn above a tent of baggy cloth bigger than a central Asiatic Yurt is a social statement as impenetrable to me as M theory or support for George Bush, but legislating against it as a way to make society "the way it used to be" is equally as stupid and contemptuous of freedom.

police are launching a program that will call upon parents in high-crime neighborhoods to allow detectives into their homes, without a warrant, to search for guns in their children’s bedrooms.

The program, which is already raising questions about civil liberties, is based on the premise that parents are so fearful of gun violence and the possibility that their own teenagers will be caught up in it that they will turn to police for help, even in their own households.

Just a week after the indictment of former Police Commissioner Bernard Kerik, [former Solicitor General Ted Olson] said Giuliani had shown “the wisdom and humility to surround himself with talented, dedicated and energetic people” as mayor.

I have little patience for wealthy televangelists who flaunt their riches as a badge of honor while representing a religion that eschews material pursuits. They deserve the criticism they receive for their self-aggrandizement -- but some of their more notable critics have little room to talk. Congress wants the IRS to take on televangelists while their own members greedily suck up lobbyist money and repay them in billions of dollars in pork.

[T]he annual Campaign Against Marijuana Planting had uprooted some 3 million plants, wiping out an estimated $11.6 billion worth of weed. That is more than twice the value of [’s] largest legal agricultural commodity, milk and cream, which was worth $5.2 billion in 2005, according to the state Department of Food and Agriculture. It is nearly four times the value of the state's largest legal cash crop, grapes, which was worth $3.2 billion.

The recent hysteria about a few peripheral citations of legal norms in other liberal democracies in Supreme Court opinions has reached some kind of apex with a speaker at a Federalist Society convention proposing a constitutional amendment banning the practice. What's strange is the amount of energy being expended over what it quite obviously a trivial issue -- it's not clear why anyone thinks such dicta have any actual causal effects on the outcome of cases. Such citations are likely to come up almost exclusively in cases where the text of the Constitution can plausibly support a wide range of outcomes, and hence are overwhelmingly likely to be used only to back up conclusions judges have reached for independent reasons. This is certainly true of the cruel and unusual punishment clause, at issue in the case that has generated the greatest outrage about the supposedly pernicious effects of citing foreign law. Does anybody seriously think that a single vote in the case would have changed had the Constitution forbidden the citation of law of other democracies?

Contrary to the best thinking of these xenophobe pandering Congressmen our cherished 230 years young founding documents were not found under Pocahontas's skirt.

Societies change and laws change with them. Jumping up and down with hands clasped about one's ears to shut out philosophical deliberations contrary to one's pre-set opinion is at best infantile.