Mushy on Osama, Tough on Benazir 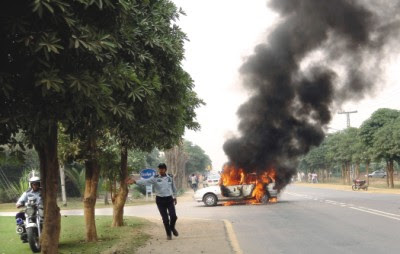 Taking the prez's suggestion that a head of state can't also be a head of military, Mushy (as Mo Dowd has taken to calling him) has announced that he'll relinquish his gold braided epaulettes and call elections in February . . . or sometime or other, presumably when his security police are finished beating up on lawyers.

While no one was looking, Mushy has been cutting deals left and right with the Taliban, including releasing several Taliban bigs from prison and basically giving the extremist Islamic group carte blanche in the mountainous tribal regions along the Afghan border when Osama bin Laden and other Al Qaeda operatives hang out.

And speaking of security police, some 4,000 of them are hanging around opposition leader Benazir Bhutto's pad making sure she doesn't do anything democratic.

Although shopping or going to the theater is out, Benazir still can talk on the phone, and you know how mouthy gals can be. In an interview with National Public Radio she said the naughtiest thing:

"I was just telling one of the policemen, 'Should you be here after us? Shouldn't you be looking for Osama bin Laden?

Photograph by John Moore
Posted by Shaun Mullen at 5:10 AM
Email ThisBlogThis!Share to TwitterShare to FacebookShare to Pinterest

Pakistan: Bribery in Limbo
Salman Rushdie's take on Pakistan is that you either get a dictatorship and rolling promises of elections or massive corruption with the Bhuttos.
Then it dawned on me that this explained the oddity of continuously seeing hordes of demonstrators dressed in suits, mostly lawyers.

look like benazir working as agent in place for western intel. cia and british seeking to depose musharaff (or chastize severely him ) for refuse commiting the war crime against him tribal people in NWFP.

this walking coup all the concoct in washington dc and him cia agent write the script.

neocon spy in whitehouse and pentagon him wanting benazir for puppet while cia control all and mass the murder of the tribes.

usa media so control for keep usa people the ignorant. but usa be punish even now. him daughter take the LBT (low back tattoo) and slut have him sex with every man, even usa gang member. this the true punish for ameriki let wicked to killing so many people of middle east.