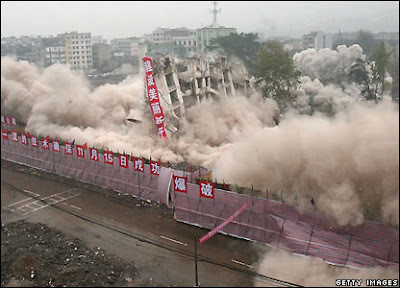 We all know the Bush administration's record on global warming. It's been a strategy of denial, delay and obfuscation. Only Exxon, its well funded "skeptics" and the most "Red Meat" Republicans continue to deny that global warming is being driven by carbon emissions from human sources: automobiles, industrial plants and electrical utilities which burn fossil fuels like oil and coal. Meanwhile, even with control of the Congress back in Democratic hands, the only legislation being proposed is the corporate friendly Lieberman-Warner bill, which, even if it makes it out of the Senate and the House in one form or another, is likely to be vetoed by President Bush.

Thus, it's not surprising that the nation's governors, both Democrats and Republicans, have decided to take matters into their own hands, rather than wait for a feckless Democratic Congress or the decidedly pro-polluter/anti-environment Bush administration.

Blackwater, the secretive private army now emerging into public view, is a perfect hinge linking two key elements of the Republican political base: 's war machine and a muscular form of fundamentalist Christianity.

Howard Krongard, the embattled State Department inspector general who is accused of blocking investigations into security contractor Blackwater Worldwide, abruptly recused himself from all Blackwater inquiries yesterday after a congressional panel confronted him with evidence that his brother is serving on a company advisory board.

The spreading Blackwater scandal involves allegations that its armed security guards, under contract to the State Department to guard diplomats in , killed at least 17 Iraqi civilians in in September. The results of an FBI investigation, which reportedly found that the Blackwater guards acted rashly and without obvious provocation, are under review at the State Department.

Krongard's elder brother, A.B. "Buzzy" Krongard, was chief executive of Alex. Brown & Sons in before serving in the No. 3 position at the CIA.

Testifying under oath before the House Oversight and Government Reform Committee yesterday, Howard Krongard at first denied as an "ugly rumor" that his brother had any financial interest or position with Blackwater. "I specifically asked him," Krongard insisted.

[Bernard] Kerik has the potential to stay in the news simply because of one largely-overlooked episode in his checkered career:

His failed, truncated stint as a top American official in post-invasion .

In May 2003, President Bush asked Kerik to journey to the newly liberated land, and train the Iraqi police force. . . . Anyway, Kerik proved to be a disaster. He's a virtual metaphor for the Bush administration's well-documented incompetence in .

He is Rudy [Giuliani]'s gift to the Bush track record - which doesn't reflect too well on Rudy, who has been trying to sell voters on the notion that he has the best credentials and leadership skills to fight the war on terror.

It is a disturbing spectacle to witness officialdom tying itself in knots over torture. On the one hand the President claims that his country is leading the global struggle against torture. On the other, he authorizes a secret detention program in which detainees can be held for years entirely incommunicado and subjected to "enhanced" interrogation techniques. Meanwhile, other officials are quick to promote "American values", yet slow to recognize torture when it is described to them or to condemn torture as a matter of principle. The moral high ground, it seems, is surrounded by particularly slippery slopes these days.

It should be straightforward. Torture and other cruel, inhuman or degrading treatment are prohibited, full stop. There are no circumstances -- war or threat of war, emergency or threat of emergency -- that can be used to justify violating this ban. Every human being has the right to be free from torture or other ill-treatment -- whether citizen or alien, whether suspected of a crime or not, whether labelled as "the enemy" or not. Torture is wrong, whatever motivates it and whoever authorizes it. The "ticking bomb" scenario -- the hypothesis put forward to seek to justify one-off torture to extract information about an imminent attack -- is a crude device improvised to manipulate public fears. There is no such thing as one-off torture; torture all too easily seeps across the moral and legal landscape. If used to obtain information, rather than purely to humiliate the individual or spread fear in the community, that information cannot be trusted, let alone used in a fair trial. Torture is an injustice, not a route to justice. It is a threat to long-term security, not a means to win hearts and minds.