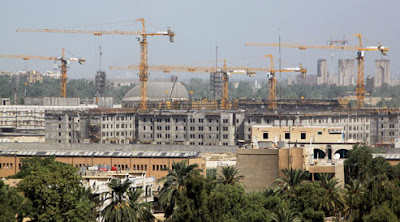 The construction [of the U.S. Embassy in ] has proceeded within budget and on time. For the State Department, this is a matter of pride. The prime contractor is First Kuwaiti General Trading & Contracting, which for security reasons was not allowed to employ Iraqi laborers, and instead imported more than a thousand workers from such countries as and . The importation of Third World laborers is a standard practice in , where the huge problem of local unemployment is trumped by American fears of the local population, and where it is not unusual, for instance, to find troops being served in chow halls by Sri Lankans wearing white shirts and bow ties.

First Kuwaiti has been accused of holding its workers in captivity by keeping their passports in a safe, as if otherwise they could have blithely exited the Green Zone, caught a ride to the airport, passed through the successive airport checkpoints, overcome the urgent crowds at the airline counters, purchased a ticket, bribed the police to ignore the country's myriad exit requirements (including a recent H.I.V. test), and hopped a flight for Dubai. Whatever the specific allegations, which First Kuwaiti denies, in the larger context of the accusation is absurd. It is that holds people captive. Indeed, the U.S government itself is a prisoner, and all the more tightly held because it engineered the prison where it resides. The Green Zone was built by the inmates themselves. The new embassy results from their desire to get their confinement just right.

The Peace Corps is asking older Americans who might have heard President John F. Kennedy’s call to service more than 40 years ago to heed his request.

Though older recruits are nothing new to the Peace Corps, it recently began an initiative to entice people age 50 or older into joining at a time when many of them are stepping away from a career and into the great unknown of retirement.

Bill Clinton's shadow over the 2008 nominating race creates potential pitfalls for his wife and for her opponents. Hillary Clinton risks being seen as something other than her own candidate, while her opponents risk offending Iowa Democrats who revere the former president.

There is an axiom about movie plots: If a gun is seen in an early scene, it will be fired before the final credits.

So it is now in the international movie of our lives after the unreeling of more than half a century with weapons that could bring total devastation.

There's no question in my mind that horror at militant Islam and fear of Muslim immigration lie behind at least some of the current vogue for atheism--you don't make the bestseller list by excoriating the evils of Lutheranism or Buddhism.

. . . The problem is that the more scorn one feels for religious belief, the less able one is to appreciate "reformed" or "moderate" variants of the faith. After all, pro-gay Episcopalians and liberation theology Catholics still believe in Christ, the afterlife, sin; reformed Jews still find wisdom in the Old Testament. Strictly speaking, an atheist should have no truck with any of it. But if all you can offer people is reasons to quit their religion--which also often means their community, their family, their support system and their identity--you're not going to have many takers. For every brilliant angry teenager you strengthen in doubt, there's a mosque- or churchful of people who'll choose the old-time religion if the only other choice is nothing.