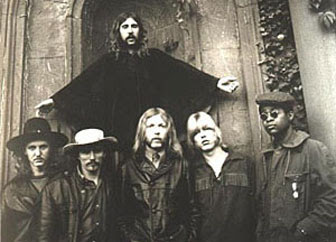 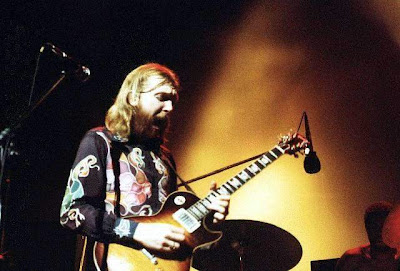 THE ALLMAN BROTHERS (TOP) AND SKYDOG
The classic 1971 live version of "In Memory of Elizabeth Reed," the Allman Brothers' wonderful mini symphony within a ballad, opens with a gently swinging Dickey Betts guitar solo evocative of a smoke-filled jazz club late at night.

As Betts slowly tricks out the song's primary theme, he is joined by the creamy signature slide sound of Duane Allman's guitar. Allman at first plays behind Betts but they soon join in unison as the tempo picks up and gallops into a quasi-Latin beat . Betts takes a solo, then Duane's brother Greg does a turn on organ as Betts and Duane play rhythm figures behind him.

Then it is Duane's turn to solo: A rephrasing of the theme that builds to a high-pitched scream with Berry Oakley laying down a thunderous counterpoint on bass. Duane backs down and then climbs again, reaching an even more furious peak that begs comparison to a John Coltrane saxophone solo. He backs down again as Butch Trucks and Jai Johanny Johanson, the drummer-percussionist duo, take a brief turn. The full band then comes in and blazes to a thunderous climax.

The seminal recording of this instrumental clocks in at barely 13 minutes on the Live at Fillmore East album. But because of its wonderful mood and time signature shifts it seems much longer even after repeated listenings over the years, and each and every time I am reminded what an extraordinary ensemble the Allman Brothers were (and are) and what an extraordinary musician Duane Allman was.

There may have been better slide guitar players technically than Allman, but none had his improvisational abilities.

* * * * *
Duane Allman was born 61 years ago today. He was motivated to take up the guitar by younger brother Gregg, who had gotten a guitar after hearing a neighbor playing country music standards. In 1959, the brothers attended a rock 'n' roll show in which blues great B. B. King performed, and both fell under the spell of his music. Gregg recalls that Duane turned to him in the middle of the show and said, "We got to get into this."

Two years later, Duane and Greg began playing publicly and Duane quit high school so that he had more time to practice. They formed the Escorts, which became the Allman Joys, and by the mid-1960s were performing throughout the Southeast from their home base in Daytona Beach, Florida.

The Allman Joys morphed into a less than successful band, The Hour Glass. Band members moved to in early 1967 and recorded two so-so albums for the label, which tried to market them as a pop band and not the blues-oriented ensemble that they were.

Inspired by Taj Mahal's great version of Blind Willie McTell's "Statesboro Blues," Duane Allman had taken up slide guitar by the time that The Hour Glass broke up in 1968. He wore an empty Coricidin cough medicine bottle over his ring finger for a slide instead of the usual tube made of glass or metal that most slide players use.

In 1969, the Allman Brothers were formed, a rarity at the time because they were an integrated group from the .

The original lineup – Duane and Gregg, Dickey Betts, Jai Johanny Johanson, Berry Oakley and Butch Trucks – would play for only three years but became one of the most influential rock groups ever because of their extraordinary improvisational interplay. Duane Allman quickly shot to the top of the rock guitar pantheon, and only Jimi Hendrix received more votes in Rolling Stone's 2003 list of the 100 Greatest Guitarists of All Time. (The rest of the top 10 included B.B. King, Eric Clapton, Robert Johnson, Chuck Berry, Stevie Ray Vaughan, Ry Cooder, Jimmy Page and Keith Richards.)

The Allman Brothers had no such thing as a creative peak – they just kept churning out great records and great live performances.

But the Live at Fillmore East album, recorded in March 1971 at Bill Graham's legendary venue, is in my view their best note-for-note effort. Appropriately, the album opens with "Statesboro Blues," trucks on through "In Memory of Elizabeth Reed" and comes to a cacauphonus conclusion with "Whipping Post."

If I could have only one live rock album, it would be Live at Fillmore East, but as enthusiasts were to find out a year later with the release of the Eat a Peach album, the Fillmore show did not end with "Whipping Post," and was followed by "Mountain Jam," an extraordinary ­­­­­­­­­­­­­­­33 minute, 41 second improvisation that riffs on a Donovan folk song, "There Is a Mountain."

I was out of the country for most of the time the original Allmans were touring, but managed to catch them one night about a month before Duane, by then 25, died in a motorcycle crash near his home in , on .

Both are buried in 's , where the band hung out in its early days and Dickie Betts had first seen a headstone inscribed with the words "In Memory of Elizabeth Reed," which inspired the song.

The Allman Brothers band soldiered on until 1975 with various lineups and then broke up. Several of the surviving members reformed the group in 1979 and it has been recording and touring on and off ever since.

Little Feat, to cite a pungent example, was never the same after leader Lowell George's death and haven’t been able to hold my interest the few times I have seen them since their reincarnation. The Allmans, of course, would never be the same without Duane, but his spirit lives on and it continues to be one of the best jamming bands extant in no small part because of the excellent musicians who have played with it. These include Chuck Leavell, Warren, Haynes Jonny Neal and Derek Trucks, who is original group member Butch Trucks' nephew and one of the best young guitarists playing today.

Meanwhile, the Gibson 59 Cherryburst Les Paul guitar (bottom photo) that Duane Allman used to record most of his songs is kept in the Vault at the Hard Rock Cafe in .

This is another in a series of appreciations of the people who have moved and inspired me over the years. It is based in part on the Wikipedia entry on Allman. Previous appreciations have included John Coltrane, Aaron Copland, Jerry Garcia, Bob Marley and Eleanor Roosevelt.