Iraq: The Conspiracy Freaks Were Right 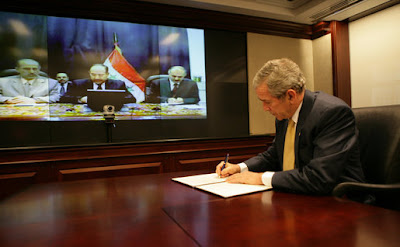 BUSH AND AL-MALIKI DO THE DEAL

I feel like the last guy in the room to get a bad joke this morning in the wake of announcements in Baghdad and Iraq that there is a quid pro quo deal in which the U.S. will babysit the Shiite-dominated Al-Maliki regime indefinitely in return for giving U.S. entrepreneurs first crack at Iraq's riches, which lest there be any doubt are its vast untapped oil reserves and not figs or palm-frond chachkes.

The arrangement carries the weighty title of a "Declaration of Principles for a Long-Term Relationship of Cooperation and Friendship Between the Republic of Iraq and the ." It is described as a work in progress but in reality is an all-but-done deal.

As an early if reluctant supporter of the war who became a vocal anti when it became obvious that the Bush administration's serial rationales were cooked, I still clung to the notion that once there was a modicum of stability in Iraq the U.S. would up and leave, closing out a sad chapter in American history.

But as knowledgeable as I have been about the ebb and flow of the military campaign, the growth of the insurgency and civil war, the eventual success of the Surge strategy in the absence of any effort by Prime Minister Al-Maliki and his American helpmates to get serious about trying to attain that stability, I did not want to believe that this was merely a 21st century version of American imperialism in Latin America, which included nearly 20 invasions in the Dominican Republican, Honduras, Guatemala, Nicaragua and elsewhere to protect and advance American commercial interests.

The underwhelming response in the mainstream media and from the Democratic presidential campaigns is further evidence that I've allowed myself to be played for a sap.

The New York Times, for one, was slow to post anything on the deal, and when it finally did its irony-free story read like a business section piece on two major Wall Street firms dealing with an accounting error, in this case the U.S. and Iraq greasing the skids to get out from under a cumbersome U.N. resolution which has been the legal justification for the invasion and occupation. Now, according to the Times, the two nations will be able to have "a far more durable political, economic and security relationship."

And so we can say aloha to planting the seeds of democracy, benchmarks, standing down when the Iraqis stand up and all of the other red, white and blue bushwah of the past four and a half years. The Decider and the conspiracy theorists were both right. Mission Accomplished! (Just don't mention Afghanistan, where the situation grows more dire by the day, okay?)

Meanwhile, I'm asking my broker to by me some ExxonMobil stock. Then I'm going to get my prescriptions changed.

Posted by Shaun Mullen at 6:29 AM
Email ThisBlogThis!Share to TwitterShare to FacebookShare to Pinterest