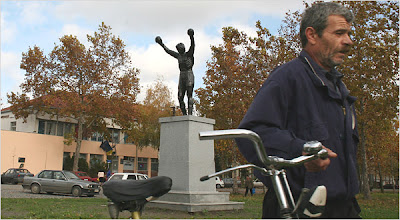 ZITISTE, Serbia -- In this sleepy farming village, residents talk of a new spirit of exaltation ever since a towering bronze and concrete statue of Rocky Balboa was erected in the village square, his boxing gloves raised in a heroic gesture of triumph.

But Rocky will soon have company in the region: Tarzan, Bruce Lee and a former Playboy model.

In a phenomenon that is either delighting or alarming cultural critics, monuments to icons of Hollywood and popular culture are sprouting across the Balkans, after almost a decade of bloodshed and vengeance that killed as many as 125,000 people in Croatia, Bosnia and Kosovo.

The noted Serbian visual artist Milica Tomic, for one, is concerned. She calls the statues “a dangerous joke in which history is being erased and replaced by Mickey Mouse.”

I'm sure there are "some" liberals who are on board the Ron Paul train, but there isn't some big liberals-for-Ron-Paul movement.

We have to leave the military option on the table to have diplomacy taken seriously by our enemies, and make no mistake, the Iranian mullahcracy is an enemy of the . That being said, we can’t simply expect to have even the most surgical of strikes go unanswered, and a shooting war with will have grave implications for , especially in the Shi’ite south. We need to solidify our gains in Iraq before looking for another adventure — and we need to act in the best interests of our nation while ensuring that we don’t make the Middle East exponentially more explosive than it already is.

No, it's not a tasteless ethnic joke, Malaysian auto manufacturer Proton really plans to team up with companies in and to build a Muslim Special, complete with Koran compartment and a compass that always points to .

A man has been severely injured after attempting to loosen a stiff wheel-nut on his car by blasting it with a shotgun. The 66-year-old American shot the wheel from arm's length with a 12-gauge shotgun and was peppered with ricocheting buckshot and debris. According to a sheriff's office report, he was taken to with severe but not life threatening injuries. His legs, feet and abdomen were worst affected, but some injuries went as high as his chin.

The man had been repairing a Lincoln Continental for about two weeks at his home near Southworth in state, about ten miles from . He had successfully removed all but one wheel-nut on the right rear wheel and resorted to firepower out of sheer frustration on Saturday afternoon.

Photo by Filip Horvat for The New York Times