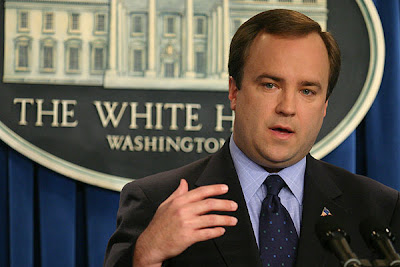 How about that Thanksgiving Eve bombshell?

Former presidential press secretary Scott McClellan reveals in a forthcoming book that he was lied to in 2003 when he falsely assured us that nobody in the White House had leaked Valerie Plame's confidential CIA status in retaliation for husband Joseph Wilson's criticism of George Bush's rationales for the Iraq war.

You may recall that the presidential mouthpiece went so far as to tell the press that he had checked with Scooter Libby and Karl Rove, and both men had assured him that they had no involvement in the infamous leak.

"The most powerful leader in the world had called upon me to speak on his behalf and help restore credibility he lost amid the failure to find weapons of mass destruction in . So I stood at the White house briefing room podium in front of the glare of the klieg lights for the better part of two weeks and publicly exonerated two of the senior-most aides in the White House: Karl Rove and Scooter Libby.

"There was one problem. It was not true.

"I had unknowingly passed along false information. And five of the highest ranking officials in the administration were involved in my doing so: Rove, Libby, the vice President, the President’s chief of staff (Andrew Card), and the president himself."

I don't know about you, but I have two big problems with McClellan's confessional:

First, if McClellan was so put out when he learned that he was lied to, why did he wait so long to blow the whistle? In fact, isn't he just as guilty of obstruction of justice as was Libby?

Second, McClellan's belated whistle blowing is a whole lot more selfish than selfless given the White House's culture of lying -- including even lying when it didn't have to -- and his key role in that.