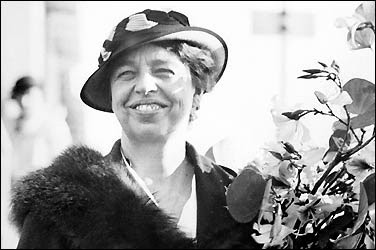 Our historic memory being what it is, and growing shorter with each succeeding generation, it is easy to forget that there was a woman political trailblazer 60 years before Hillary Rodham Clinton.

With having a good shot at being the Democratic presidential nominee and first woman president, it seems appropriate to pause and pay homage to Eleanor Roosevelt.

Roosevelt, who died 45 years ago today, was the first First Lady in the modern mold, which is to say not merely an obedient wife and smiling hostess at White House functions, but a hands-on presidential helpmate and a force in her own right. In fact, she was one of the most powerful influences in civil and women's rights during the four decades that straddled the middle of the last century, something that no First Lady – including Mrs. Clinton – can claim.

* * * * *
Anna Eleanor Roosevelt had achieved heroic status in my family long before I arrived on the planet two and half years after FDR's death. I remember browsing through a book of classic New Yorker magazine cartoons as a youngster, and a 1943 howler showing striking coal miners with blackened faces deep beneath the earth caught my attention. One says to the other: "My God! Here comes Mrs. Roosevelt."

The First Lady did indeed intervene in that strike, speaking out against company stores that "keep miners in hock forever." But the path to prominence for this painfully shy and insecure woman who was all too aware of her lack of beauty is a story in itself – and, not that it matters, could not be more different that Hillary Clinton's ascendancy.

was working in a settlement house when she married Franklin Delano Roosevelt, her fifth cousin once removed, in 1905 at age 21. She bore the future president six children and not unlike Mrs. Clinton had to weather an adulterous affair.

In 1918, she discovered love letters revealing that her husband was involved with Lucy Mercer.

"The bottom dropped out of my own particular world," she would say later. "I faced myself, my surroundings, my world, honestly for the first time." The upshot was that Eleanor Roosevelt redefined herself as standing apart from FDR, not merely being a loyal wife. She reconnected with her activist roots and became a post-suffrage feminist, dedicating herself to abolishing child labor and establishing a minimum wage and worker protection laws.

When FDR was paralyzed by polio in 1921 she became even more active politically as her husband’s "eyes and ears" in innumerable trips around the country where she gathered the grass-roots knowledge that would hold him in such good stead when he became president in 1933 at the height of the Great Depression.

"They made an exceptional team. She was more earnest, less devious, less patient, less fun, more uncompromisingly moral; he possessed the more trustworthy political talent, the more finely tuned sense of timing, the better feel for the citizenry, the smarter understanding of how to get things done. But they were linked by indissoluble bonds. Together they mobilized the American people to effect enduring changes in the political and social landscape of the nation."

Although Eleanor Roosevelt was deeply involved in FDR's New Deal programs, her greatest influence was in civil rights, and she all but forced her husband to sign a series of executive orders barring discrimination in depression-era government work projects.

In 1938, while attending a conference in , she refused to abide by a segregation ordinance that required her to sit in the white section of the auditorium apart from her black friends. The following year, she publicly resigned from the Daughters of the American Revolution after it barred the black singer Marian Anderson from its , auditorium. My mother and grandmother followed suit.

Roosevelt also was a trailblazer as a newspaper columnist, had her own radio show and conducted frequent press conferences, the latter restricted to women journalists. She knew that this would force news organizations to hire female reporters, often for the first time.

"There were other warps and twists that caught her eye. Long before the contemporary women's movement provided ideological arguments for women's rights, Eleanor instinctively challenged institutions that failed to provide equal opportunity for women.

" . . . [S]he provided a powerful voice in the campaign to recruit women workers to the factories during the war. She was instrumental in securing the first government funds ever allotted for the building of child-care centers. And when women workers were unceremoniously fired as the war came to an end, she fought to stem the tide. She argued on principle that everyone who wanted to work had a right to be productive, and she railed against the closing of the child-care centers as a shortsighted response to a fundamental social need. What the women workers needed, she said, was the courage to ask for their rights with a loud voice."

Eleanor Roosevelt did not consider herself to be a feminist.

That is incidental to her life story as it should be to Hillary Clinton's. Or for that matter any other woman in the public arena who should be judged for her accomplishments, not her gender. Be that as it may, I happen to believe that Roosevelt was a classic feminist:

A woman who insisted on having a life in addition to her husband's.

A woman who was able to turn her vulnerabilities into strengths.

A woman whose inner beauty shined through her physical self.

And a woman who was a powerful advocate for social justice to whom we all owe an enormous debt.

Based in part on a profile by Doris Kearns Goodwin

Great post. What struck me about it, when I read it yesterday, was this passage from your first Kearns excerpt, re: the yin-and-yang of Mr. and Mrs. Roosevelt:

"They made an exceptional team. She was more earnest, less devious, less patient, less fun, more uncompromisingly moral; he possessed the more trustworthy political talent, the more finely tuned sense of timing, the better feel for the citizenry, the smarter understanding of how to get things done. But they were linked by indissoluble bonds. Together they mobilized the American people to effect enduring changes in the political and social landscape of the nation."

Elsewhere, you suggest Hillary and Eleanor shouldn't be wholly compared, and I agree with that. But with a few changes/deletions to the aforementioned paragraph, the "duo" comparisons (at least) are somewhat remarkable ...

"They made an exceptional team. She was more earnest ... less patient, less fun, more uncompromisingly [tough]; he possessed the more trustworthy political talent, the more finely tuned sense of timing, the better feel for the citizenry, the smarter understanding of how to get things done. But they were linked by indissoluble bonds. Together they mobilized the American people to effect enduring changes in the political and social landscape of the nation."