'Superman Comes to the Supermarket' 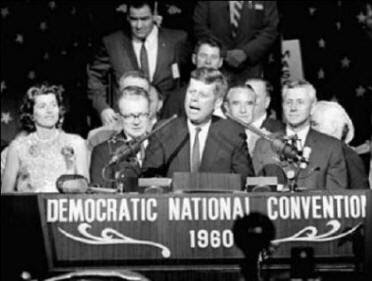 While the recently departed Norman Mailer is best known as a novelist, back in the day he was a preeminent political commentator. (And a career misogynist, which most obit writers failed to note, but that's another matter.)


Anyhow, in a lengthy article for Esquire magazine titled "The Superman Comes to the Supermarket," Mailer riffs on celebrity marketing in postwar American politics not as a so-called objective journalist but with an edgy point of view that occasionally resembles that of a pugilist, which he was in his youth.

The celebrity in this case was John F. Kennedy, whom Mailer saw as being short on policy but long on image. He noted that JFK's glamour and marketability made his nomination at the 1960 Democratic National Convention in an all but foregone conclusion.

Get beyond Mailer’s dense prose and appreciate these excerpts for their prescience. Better still, read the entire article.

If that Democratic Convention which has now receded behind the brow of the Summer of 1960 is only half-remembered in the excitements of moving toward the election, it may be exactly the time to consider it again, because the mountain of facts which concealed its features last July has been blown away in the winds of High Television, and the man-in-the-street (that peculiar political term which refers to the quixotic voter who will pull the lever for some reason so salient as: "I had a brown-nose lieutenant once with Nixon's looks," or "that Kennedy must have false teeth"), the not so easily estimated man-in-the-street has forgotten most of what happened and could no more tell you who Kennedy was fighting against than you or I could place a bet on who was leading the American League in batting during the month of June.

* * * * *
Seeing Los Angeles after ten years away, one realizes all over again that America is an unhappy contract between the East (that Faustian thrust of a most determined human will which reaches up and out above the eye into the skyscrapers of New York) and those flat lands of compromise and mediocre self-expression, those endless half-pretty repetitive small towns of the Middle and the West whose spirit is forever horizontal and whose marrow comes to rendezvous in the pastel monotonies of Los Angeles architecture.

* * * * *
The afternoon he arrived at the convention from the airport, there was of course a large crowd on the street outside the Biltmore, and the best way to get a view was to get up on an outdoor balcony of the Biltmore, two flights above the street, and look down on the event. One waited thirty minutes, and then a honking of horns as wild as the getaway after an Italian wedding sounded around the corner, and the Kennedy cortege came into sight, circled Pershing Square, the men in the open and leading convertibles sitting backwards to look at their leader, and finally came to a halt in a space cleared for them by the police in the crowd. The television cameras were out, and a Kennedy band was playing some circus music. One saw him immediately. He had the deep orange-brown suntan of a ski instructor, and when he smiled at the crowd his teeth were amazingly white and clearly visible at a distance of fifty yards. For one moment he saluted Pershing Square, and Pershing Square saluted him back, the prince and the beggars of glamour staring at one another across a city street, one of those very special moments in the underground history of the world, and then with a quick move he was out of his car and by choice headed into the crowd instead of the lane cleared for him into the hotel by the police, so that he made his way inside surrounded by a mob, and one expected at any moment to see him lifted to its shoulders like a matador being carried back to the city after a triumph in the plaza.

* * * * *
Yes, the life of politics and the life of the myth had diverged too far. There was nothing to return them to one another, no common danger, no cause, no desire, and, most essentially, no hero. It was a hero America needed, a hero central to his time, a man whose personality might suggest contradictions and mysteries which could reach into the alienated circuits of the underground, because only a hero can capture the secret imagination of a people, and so be good for the vitality of his nation; a hero embodies the fantasy and so allows each private mind the liberty to consider its fantasy and find a way to grow. Each mind can become more conscious of its desire and waste less strength in hiding from itself.

* * * * *
What was retained later is an impression of Kennedy's manners which were excellent, even artful, better than the formal good manners of Choate and Harvard, almost as if what was creative in the man had been given to the manners. In a room with one or two people, his voice improved, became low-pitched, even pleasant—it seemed obvious that in all these years he had never become a natural public speaker and so his voice was constricted in public, the symptom of all orators who are ambitious, throttled, and determined.

His personal quality had a subtle, not quite describable intensity, a suggestion of dry pent heat perhaps, his eyes large, the pupils grey, the whites prominent, almost shocking, his most forceful feature: he had the eyes of a mountaineer. His appearance changed with his mood, strikingly so, and this made him always more interesting than what he was saying. He would seem at one moment older than his age, forty-eight or fifty, a tall, slim, sunburned professor with a pleasant weathered face, not even particularly handsome; five minutes later, talking to a press conference on his lawn, three microphones before him, a television camera turning, his appearance would have gone through a metamorphosis, he would look again like a movie star, his coloring vivid, his manner rich, his gestures strong and quick, alive with that concentration of vitality a successful actor always seems to radiate. Kennedy had a dozen faces. Although they were not at all similar as people, the quality was reminiscent of someone like Brando whose expression rarely changes, but whose appearances seems to shift from one person into another as the minutes go by, and one bothers with this comparison because, like Brando, Kennedy's most characteristic quality is the remote and private air of a man who has traversed some lonely terrain of experience, of loss and gain, of nearness to death, which leaves him isolated from the mass of others.

Hat tip to Dick Polman at American Debate
Posted by Shaun Mullen at 5:32 AM
Email ThisBlogThis!Share to TwitterShare to FacebookShare to Pinterest

www.vizcaya-3d.com said...
This comment has been removed by a blog administrator.
2:01 PM