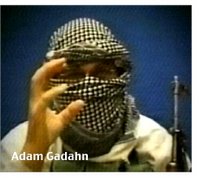 Adam Yahiye Gadahn, a Southern California man who convert to Islam, has become the first American since World War II to be charged with treason.

The 28-year-old Gadahn, who is believed to be living in Pakistan, has appeared in at least five Al Qaeda videotapes in which he endorses terror attacks on the U.S. and advocates killing Americans.

Considering all of the American wingnuts -- genuinely dangerous and otherwise -- who have said pretty much what Gadahn has been saying for the last two years -- why is he being charged and why now?

He's being charged now because there is an election in less than four weeks and the Republican issues cupboard is pretty bare except for national security and . . . well, I guess that's about it.

Why he's being charged is tougher.

This is because treason, which is the crime of being disloyal to one's state, can be punishable by death. That has been a tough charge to prove because the government must present at least two witnesses to the same act of treason, or a courtroom confession, to prove its case.

This is the test outlined in Section 3 of Article 3 of the Constitution, where treason is the only crime delineated by name, and explains why there have been fewer than 40 prosecutions for treason in U.S. history and only a handful of convictions.

Says Brian Levin, an attorney and director of Cal State San Bernardino's Center for the Study of Hate and Extremism:

"Most people who are arrested for aiding and abetting the enemy tend to do it in secret. But because [Gadahn] has been so brazen and public in his videotaped statements, it makes it much easier to reach the constitutional requirements for proving treason."

The last person charged with treason was Tomoya Kawakita, a Japanese American who also was from Southern California.

He was found guilty of torturing American prisoners of war who worked at a mining company in Japan where he was an interpreter during World War II.

Kawakita was sentenced to death, and the Supreme Court affirmed his conviction. But President Eisenhower, responding to appeals from the Japanese government, commuted his sentence to life in prison. President Kennedy ordered him freed on the condition that he be deported to Japan and barred from returning.

* * * * *
"Treason Doth Never Prosper" is a portion of a famous quote by Sir John Harrington (1561-1610), a British courtier. The entire quote: "Treason doth never prosper, what is the reason? For if it prosper, none dare call it Treason."
Posted by Shaun Mullen at 2:11 AM
Email ThisBlogThis!Share to TwitterShare to FacebookShare to Pinterest