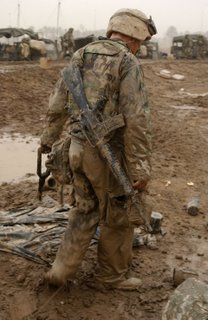 Pete Seeger, the great American folk singer, recorded "Waist Deep in the Big Muddy" in 1967 as images of the horrors of the Vietnam War began to fill television screens in American living rooms. The song was ostensibly about World War II, but it was no secret that Seeger was alluding to label, , refused to distribute the song.

Enter the Smothers Brothers, who invited Seeger to perform the song on their "Comedy Hour," a popular summer replacement show on CBS Television, but the Columbia-owned network balked.

Antiwar sentiment grew steadily, and in 1968 Seeger was invited back on the "Comedy Hour" and performed "The Big Muddy" before a TV audience of 7 million people as the finale of an anti-war medley.

"Did the song do any good? No one can prove a damned thing. It took tens of millions of people speaking out before the Vietnam War was over. A defeat for the Pentagon, but a victory for the American people."

Another era. Another war. And "The Big Muddy" seems more relevant now than ever.


It was back in nineteen forty-two,
I was a member of a good platoon.
We were on maneuvers in-a Loozianna,
One night by the light of the moon.
The captain told us to ford a river,
That's how it all begun.
We were -- knee deep in the Big Muddy,
But the big fool said to push on.

The Sergeant said, "Sir, are you sure,
This is the best way back to the base?"
"Sergeant, go on! I forded this river
'Bout a mile above this place.
It'll be a little soggy but just keep slogging.
We'll soon be on dry ground."
We were -- waist deep in the Big Muddy
And the big fool said to push on.

The Sergeant said, "Sir, with all this equipment
No man will be able to swim."
"Sergeant, don't be a Nervous Nellie,"
The Captain said to him.
"All we need is a little determination;
Men, follow me, I'll lead on."
We were -- neck deep in the Big Muddy
And the big fool said to push on.

All at once, the moon clouded over,
We heard a gurgling cry.
A few seconds later, the captain's helmet
Was all that floated by.
The Sergeant said, "Turn around men!
I'm in charge from now on."
And we just made it out of the Big Muddy
With the captain dead and gone.

We stripped and dived and found his body
Stuck in the old quicksand.
I guess he didn't know that the water was deeper
Than the place he'd once before been.
Another stream had joined the Big Muddy
'Bout a half mile from where we'd gone.
We were lucky to escape from the Big Muddy
When the big fool said to push on.Well, I'm not going to point any moral;
I'll leave that for yourself
Maybe you're still walking, you're still talking
You'd like to keep your health.
But every time I read the papers
That old feeling comes on;
We're -- waist deep in the Big Muddy
And the big fool says to push on.