Iraq IV: The Other Cost of the War 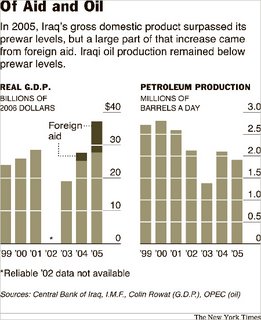 Money seems downright mundane when you consider the cost of the Iraq war in blood, sweat and tears, but there is a monetary component.

The view of many economists is that the war will cost the U.S. economy $1 trillion over a 10-year period -- about $100 billion a year -- or about 1 percent of the national income during that period.

Crunching numbers for the economic impact on Iraq itself is more difficult because it is so dependent on oil production, but Colin Rowat, an expert on the Iraq economy at the University of Birmingham in England, is giving it the old college try.

The war has cost Iraq at least 40 percent of its national income.

You can take him at his word or read on to find out how he reached this unhappy conclusion:

According to an article by Anna Bernasek in the New York Times, Rowat looked at the six-year stretch from 2000 to 2005 and divided it into thirds.

During the first period, 2000-2001, U.N. trade sanctions against Iraq were beginning to crumble, the Security Council lifted the cap on Iraqi oil sales, and the Iraqi government had become adept at getting around the remaining trade restrictions. The second period, 2002 -2003, covers the buildup to war and the invasion itself. The last period, 2004-2005, covers post-invasion years when sanctions were removed.

Rowat made several kinds of calculations, including estimating how the economy might have performed had the war never happened.

Looking at the actual Iraqi economy, he calculated that it may have grown 3.1 percent a year, on average and after adjusting for inflation, from 2000 through 2005. When he subtracted foreign aid from that total, however, he found that the economy actually contracted 0.2 percent a year over the same period. He said aid was especially crucial in 2005, when it kept the economy afloat.

Based on the steep rise in oil prices, he estimated that without a war and with steady oil production, Iraq would have grown 12 percent a year after adjusting for inflation. That rate would have made Iraq one of the fastest-growing economies in the world, albeit one that was expanding from a very small economic base.

Using Rowat’s calculations, what might the economic cost of the war be for Iraq?

If there had been no war, Iraq’s economy in 2005 might have amounted to $61 billion in today’s dollars, compared with the actual $37 billion that he estimates. That works out to a loss of $24 billion because of the war, or a 40 percent cut in gross domestic product per capita — an average loss of around $900 for each Iraqi in 2005.