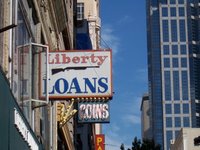 I know a thing or two about predatory lending -- the practice of charging userous loan interest rates and exhorbitant service fees. I directed an award-winning newspaper series on it that resulted in some laws being enacted (and ignored) and some lenders being booted (who just got jobs with other financial sharks).

But I never considered that predatory lending could save lives until I read this:

"Thousands of U.S. troops cannot be deployed overseas because they are too deep in debt.. Security clearances can be revoked when debt payments amount to more than 30 percent of a soldier's salary."

(Hat tip to Lindsay at Majikthise.)
Posted by Shaun Mullen at 1:38 AM
Email ThisBlogThis!Share to TwitterShare to FacebookShare to Pinterest