Pakistan's Pact With the Devil 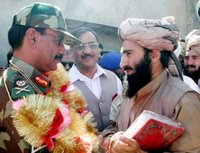 As if we needed further evidence that Pakistani President Pervez Musharraf's regime climbs into bed with the Taliban when it is politically expedient, Bill Roggio reports at his The Fourth Rail that the regime and outlaw group have actually signed a pact in the breakaway Waziristan region on the pourous border with Afghanistan.

(The deal was inked between Maulvi Abbas Khan, at the right in the photo, and other so-called tribal leaders and a Pakistani government representative. Independent Pakistani media reports say that the signers are Taliban supporters or outright members of the group.)

"This has far-reaching implications. The Taliban and al-Qaeda have a safe haven in every sense of the word. They are no longer the tired, hunted fugitives concerned about the Pakistani Army. Their energies can now be directed from survival to current and future operations. The Pakistani government has not ceded authority over the tribal agencies, only control. Musharraf has repeatedly stated cross border raids from U.S. and NATO forces would be unacceptable violations of Pakistan's sovereignty. The Taliban and al-Qaeda have openly established training camps and are recruiting, arming and training fighters, and sortieing them into Afghanistan, within Pakistan, and beyond."

Recall that it was only a few days ago that The Decider was kissing Musharraf's backside at the White House.
Posted by Shaun Mullen at 12:58 AM
Email ThisBlogThis!Share to TwitterShare to FacebookShare to Pinterest