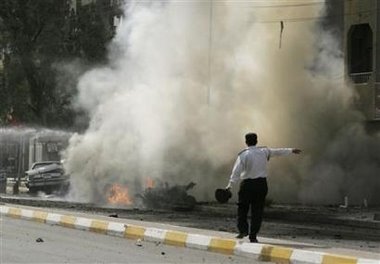 "The insurgency is in its last throes."

The last throes of that insurgency has taken the lives of 73 U.S. troops in October -- including 13 in Baghdad this week alone -- and after pretty much ignoring The Decider's Excellent Adventure in Mesopotamia for months, the mainstream media is sitting up and taking notice.

This in turn has lead a few of the remaining apologists for the war to suggest that the steady uptick in carnage is being fed by the MSM. The brass hunkered down in Baghdad's Green Zone have now also taken up the cry.

There is an teensy element of truth to the linkage.

The insurgency is fighting an information war as well as a physical war, just like the North Vietnamese and Viet Cong did 40 years ago. You bet your sweet ass that the insurgents want to influence midterm elections. Why do you think that CNN has been endlessly running videotape of snipers at work from the insurgents themselves.

If this comes as news to you, as it apparently does the generals hunkered down at the Pentagon and in the Green Zone, then you haven't been paying attention.

I can only imagine that your average insurgent sniper goes home after a hard day harrassing U.S. convoys and basks in the images of his dirty work as they are beamed into his living room from Al Jazeera or CNN International.

But is there a cause-and-effect relationship? No, because the epidemic of killing has been going on for many months while the MSM was distracted by sex scandals, school shootings and other bad behavior much closer to home. The fact that the generals says that attacks on Americans are up 22 percent this month (how the hell did they come up with that number?) proves nothing except that things are really bad and getting worse.

Speaking of Vietnam, The Decider has acknowledged that comparisons between the violence in Iraq and 1968 Tet Offensive, a turning point in public opinion in the U.S. about that war, are appropriate. What is getting lost in the scramble to cement that comparison is that Tet was a public relations victory for the VC and NVA and a military defeat.

CNN is running a three-part series on the insurgency that includes that videotape, and only the math-inhibited media outlets are failing to note that at the present rate of U.S. fatalities, October will be the third deadliest month in the entire war. The 13 American dead in the last four days is the heaviest toll since the March 2003 invasion. Way to go, George!

In reaction to the bloodshed:

* Prime Minister Nouri al-Maliki summoned the nation's two most powerful Shiite leaders for a sit-down in the holy city of Najaf.

Elsewhere, Max Boot says that more soldiers need to become advisors to the Iraqi Army for democracy to, uh . . . succeed.

The Guardian reports that a ranking British officer states flat out that the drain of resources from Afghanistan to stanch the bleeding in Iraq has cost years of progress in the fight against the Taliban.

THE SCALES FALL FROM CONSERVATIVE EYES
Jonah Goldberg, whose reliably pro-war posts at the Weekly Standard have failed to keep up with "events on the ground," as they say, now acknowledges the error of his ways.

And Wretchard, who has been tirelessly pro-U.S. at his Belmont Club blog, has kind of sort of thrown in the towel.

UPDATE ON THE MAHMOUDIYA RAPE-MURDERS
The commander of the 101st Airborne Division has referred murder charges against four soldiers accused of raping and killing a 14-year-old girl and murdering her sister and their parents in Mahmoudiya, south of Baghdad, on March 12.

A total of eight soldiers are charged. Two face capital charges, and would be eligible for the death penalty, if convicted. The other two could face life in prison without parole.

QUOTE DU JOUR ON THE WAR
Senator Conrad Burns, the Minnesota Republican, responding to John Tester, his Democratic challenger, during a debate:

"He says our president don’t have a plan. I think he’s got one….[But] we’re not going to tell you what our plan is, Jon, because you’re just going to go out and blow it."

Posted by Shaun Mullen at 1:15 AM
Email ThisBlogThis!Share to TwitterShare to FacebookShare to Pinterest