Election II: A Showdown on Abortion in America 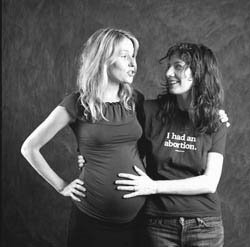 Lost in the uproar over the war in Iraq and scandal in Washington is the fact that there are a record number of initiatives and referendums (*) to be voted on in the U.S. midterm election next week. None is more important and has larger long-term implications than a ballot measure in South Dakota on whether to ban all abortions.

In February, a law was enacted in that conservative state that would make it a felony for a doctor to perform an abortion under any circumstance other than saving a mother’s life. That’s right, your daughter gets knocked up as a result of rape or incest and she’s going to have to find a back-alley solution if she has to terminate the pregnancy in South Dakota -- and then face the prospect of going to jail, to boot.

The law is a direct challenge to Roe v. Wade, the landmark 1973 Supreme Court decision that established a woman's constitutional right to abortion. It was assumed (and I predicted as much in a March post) that opponents of the South Dakota ban would go to court and the Supreme Court eventually would be forced to reconsider Roe.

As Ruth Rosen, a journalist and historian, write at TPM Cafe, a funny thing happened on the way to Washington:

"A coalition of women's-rights advocates, reproductive-rights and civil-liberties groups outflanked anti-abortion legislators and took the debate directly to the people, rather than to the courts. They collected sufficient signatures to place a referendum on the 7 November ballot, asking South Dakotan voters whether they really wanted to ban all abortions. If approved, the ban against abortion will remain in effect, unless it is declared unconstitutional by the Supreme Court. If defeated, the South Dakotan legislature will have been repudiated by the voters.

"Right now, the battle over the referendum is still too close to call. The people in South Dakota are known for their politeness, conservatism, privacy, and avoidance of confrontation. Many good friends won't even discuss the subject with each other, even though activists in the abortion wars, all over the country, eagerly await the results."

Rosen notes that the referendum is more than another chapter of the never ending national debate over abortion:

"It is also a struggle within the Republican Party itself. The ban on all abortions is the inevitable result of President Bush's success in enlisting the religious right as an important part of his political base. But many Republicans are also moderates or libertarians, not just social conservatives. In [South Dakota] where 48% of the voters are registered as Republicans, moderates in the party rightly fear negative political fallout if all abortions are banned."

THE ELEPHANT IN THE ROOM


Then there's the elephant in the room -- the war in Iraq -- that pro-lifers so blithely ignore.

"So a pro-lifer can support all manners of hypothetical wars that conform to a utilitarian standard of saving life. Fine. You can also in the same way, based on a very long and particular set of definitions of what is and isn't life, come out against abortion. . . . But let me introduce the elephant in the room. [By] any standard, our present Iraq War could not possibly be consistent with any Pro Life philosophy I've ever heard of."

(*) Click here for a round-up of ballot measures around the U.S.
Posted by Shaun Mullen at 3:22 AM
Email ThisBlogThis!Share to TwitterShare to FacebookShare to Pinterest

World estimations of the number of terminations carried out each year is somewhere between 20 and 88 million.

50% of that 1.3 million claimed failed birth control was to blame.

A further 48% had failed to use any birth control at all.

And 2% had medical reasons.

That means a stagering 98% may have been avoided had an effective birth control been used.


Australia (with a population of 20 million) terminated over 100 thousand young people last year. I've done the figures and Australia do more per head.


Abortion has got to be by far the Mother of all holocausts, the most extensive crime against humanity the world has ever seen.

Though it pains me to say it but, there may always be a need for the 2% medical reasons and such, but that's all.

How do we get them to be honest with themselves, about when life begins.

Everyone knows life begins at conception,

Sadly many prefer to have an occasional abortion over using birth control, they have all kinds of reasons, each of them selfish.

Then there's the christian impossition,(all a bit talibanish), and their men in high places.(church and state should never entwine) their stance against b/c has only added to the numbers.

Sanity must provale, abortions should remain available and safe to the 2% and the rest need to have a good look at themselves and get their act together.

I'd like to see an ultrasound in every clinnic to provide a more informed choice,
before going through with something they may regret.

I'd also like to see effective birth control made available to all who can't afford it.