Politix: How the Semi-Mighty Have Fallen & More 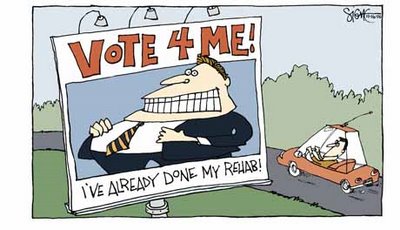 Curt Weldon, a congressman from Delaware County, a Philadelphia suburb, is but one of many conservative Republicans fighting for their political lives. It's just that his death spiral hasn't been getting the ink of some of his ilk. Until now.

That changed this week when federal agents raided the homes of Weldon's lobbyist daughter and the Delaware County GOP chairman and four other sites, including two in Jacksonville, Florida. They're investigating funny business (which is to say funny money business) involving Congressman Weldon, Daughter Weldon and Russian oil giant Itera, which has its American office in Jacksonville.

I've followed the long arc of Weldon's political career with some interest since his congressional district is in the back yard of Kiko's House.

Weldon was elected in 1986 in a heavily Democratic district despite having little experience beyond serving in a local volunteer fire company, but rose to some prominence as a foreign affairs expert, notably on the Koreas, while dutifully providing pork to his largely blue collar constituents in the communities along the Delaware River south of Philadelphia.

But like many congressmen who seem to be automatically elected every two years, Weldon got fat (literally in his case) and lazy on the perks and temptations that come with the office. He failed to notice that his cred in the river wards could no longer be taken for granted and that his Democratic challenger, a plain vanilla Navy vet with no political experience, was gaining ground on him.

Weldon, who is quick to see conspiracies (and continues to believe that there are enormous stashes of WMDs buried in the Iraqi desert), blames his legal woes on a liberal Democratic cabal.

An upset is not outside the realm of possibilities, and Weldon will have no one to blame but himself if he turns out to be well done.

"Santorum’s ongoing problem . . . is that he can’t help saying exactly what he really thinks – despite the fact that his commendably unvarnished candor is probably turning off the suburban Republican moderates whose votes he desperately needs in order to survive. Assuming they haven’t tuned him out already.

"Take Iraq, for example. Most Pennsylvanians, echoing most fellow citizens elsewhere, by this point have judged the war to be a failure, either in terms of its underlying mission or for its incompetent execution, or both; nor do they believe that the Iraq war has made Americans safer at home. But Santorum is still insisting that the voters have got it all wrong . . . "

DOOM AND GLOOM
Fred Barnes, the smarmy conservative Republican apologist, has taken off his rose-colored glasses and now says:

"Republicans and conservatives, brace yourselves!

"Strategists and consultants of both parties now believe the House is lost and House Democratic leader Nancy Pelosi will become speaker. At best, Republicans will cling to control of the Senate by a single seat, two at most. For many election cycles, Republicans have been the boys of October, using paid media and superior campaign skills to make up lost ground and win in November. This year, they were the boys of September, rallying strongly until that fateful day, September 29, when the Mark Foley scandal erupted. October has been a disaster so far. A strong finishing kick for Republicans, minimizing Democratic gains, is possible. They pulled one off brilliantly in President Bush's first midterm election in 2002. But recovery will be harder this time, a lot harder."

I'm in tears!
DOOM AND GLOOM. NOT!
Josh Marshall wonders why The Decider and Karl Rove seem to be so upbeat about Republican election chances.

He's got a thread going at TPM Muckraker.
DENNIS THE MENACE
Beleaguered House Majority Leader Dennis Hastert was booked to appear at dozens of
Republican fundraisers and other campaign events, but because of the Foley scandal is a bit too much of a hot potato for some GOPers.

Lamont now seems headed for defeat and Lieberman for victory (as an independent) because it is Lieberman who is being outspoken this fall, while Lamont is tip-toeing around on the advice of his pollsters. It is not inconceivable that Lamont could finish third behind Lieberman and the only conservative in the race, Republican Alan Schlesinger.

More here and here.
POLL AXED
It is the rare candidate who is actively campaigning for The Decider's Excellent Adventure in Mesopotamia, while droves of candidates are running from it.

Meanwhile, a new Zogby poll shows just 34 percent think the war has been worth the loss of American lives, down from 40 percent just two weeks ago.

(Cartoon by Signe Wilkinson/Philadelphia Daily News)
Posted by Shaun Mullen at 2:58 AM
Email ThisBlogThis!Share to TwitterShare to FacebookShare to Pinterest