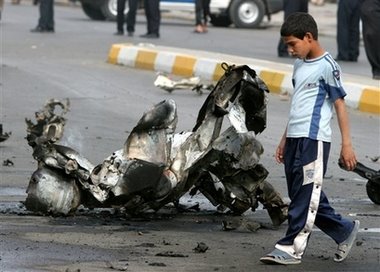 My parents told me stories of how they had to walk many miles through snow, sleet and rain to get to school when they were children. What will today's generation of young Iraqi's tell their children about their treks during the war?

Millions of Iraqi children are being robbed of their childhood. You might called it armed robbery.

Jonathan Powers, manager of the War Kids Relief Program of the Vietnam Veterans of America Foundation, addresses this crises in an article, "Iraq's Youth in a Time of War," in the current issue of the John Hopkins' School of Advanced International Studies Review Journal.

(Photograph by Samir Mizban/The Associated Press)
Posted by Shaun Mullen at 1:35 AM
Email ThisBlogThis!Share to TwitterShare to FacebookShare to Pinterest