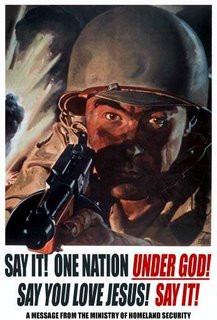 I'm one of those folks who drinks down discussions on national security in little sips rather than big gulps. I find most commentary on the issue to be little more than numbing generalizations from people with partisan axes to grind.

But even a near tea totaler like myself has felt a sea change in the the Republican line on national security in the last few days as The Decider in Chief has been pretty much forced to confront what the reality-based community has known for some time -- the war in Iraq is a catastrophe of epic proportions.

Daniel Dressner is a big-gulp guy. He says not only is there a sea change, but all of a sudden the Republicans are sounding an awful lot like . . . you ready for this? The Democrats, whom they have endlessly claimed are weak on national security.

"For the past five years, Democrats have been vulnerable on national security issues. Bush and the Republicans projected a clear image of taking the war to the enemy, and never yielding in their drive to defeat radical Islamists. The Democrats, in contrast, projected either an antiwar position or a "yes, but" position. The former looked out of step with the American people, the latter looked like Republican lite. No matter how you sliced it, the Republicans held the upper hand.

"The recent rhetorical shift on Iraq, however, has flipped this phenomenon on its head. If Bush acknowledges that "stay the course" is no longer a statisfying status quo, he's acknowledging that the Republican position for the past few years has not worked out too well. If that's the case, then Republicans are forced to offer alternatives with benchmarks or timetables or whatever. The administration has had these plans before, but politically, it looks like the GOP is gravitating towards the Democratic position rather than vice versa.

"If this is what the political optics look like, then the Republicans will find themselves in the awkward position of being labeled as "Democrat lite" in their positions on Iraq. And in elections, lite never tastes as good as the real thing."

(Hat tip to Kevin Drum at The Political Animal)
Posted by Shaun Mullen at 2:21 AM
Email ThisBlogThis!Share to TwitterShare to FacebookShare to Pinterest