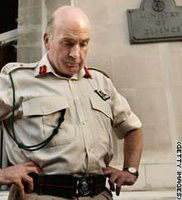 Acknowledging that the presence of foreign troops is making Iraq less secure, the chief of the British Army has called for the pullout of his troops.

General Richard Dannatt added that post-invasion planning for that war was "poor, probably based more on optimism than sound planning," but said he had "more optimism" that "we can get it right in Afghanistan."

"[We] should get ourselves out sometime soon because our presence exacerbates security problems.

Dannatt, who took over as the Army's chief of general staff in August, said the U.S.-led coalition's plan to establish a democracy in Iraq that would be "exemplar for the region" is unlikely to happen.

"That was the hope. Whether that was a sensible or naive hope, history will judge. I don't think we are going to do that. I think we should aim for a lower ambition."

Dannatt's remarks set off a firestorm because they directly contradict the position of British Prime Minister Tony Blair, who is a staunch supporter of the war and has been President Bush's closest ally in the fight.

Asked in a later interview if he wanted to retract anything he said, Dannatt stood firm:

"I have withdrawn none of the comments that I have made. I have given a little more explanation about what I meant by 'sometime soon'; that’s not backtracking."

Posted by Shaun Mullen at 2:13 AM
Email ThisBlogThis!Share to TwitterShare to FacebookShare to Pinterest