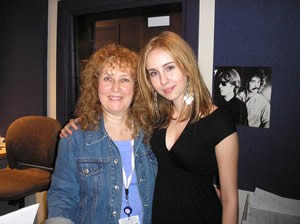 Helen with Leila Broussard
In 1976, FM rock radio was pretty much a man's world. But that year two woman broke into the medium as DJs -- Helen Leicht at WIOQ in Philadelphia and Alison Steele at WNEW in New York City. FM was never the same.

Helen, who celebrates her 30th anniversary on the air this week, debuted a now widely copied concept show called Breakfast With the Beatles and later left 'IOQ after the kind of format change that has strangled the independence out of commercial FM radio. She migrated across town to listener-supported, non-commercial WXPN at the University of Pennsylvania, which over the last quarter century has gone from being just another campus radio station to one of the most influential and listened to alternative music stations in the U.S.

Helen and 'XPN are a match made in radio heaven. She has a wonderfully soothing radio voice. She has exquisite tastes. She never shouts or cajoles. She is a tireless supporter of local artists and 'XPN plays a heap of them.

One such band was Burning Bus, which played an eclectic range of original music influenced by styles from rock to Latin to reggae to lounge, and that is how I met Helen.

I was traveling with Burning Bus and doing publicity for them. She embraced the Bus in a big way, got their music into the'XPN rotation and arranged to have them to appear on The World Cafe.

The Bus was destined for the big time, but despite Helen's good advice and encouragement, band members got cold feet and they eventually broke up.

No matter, it was fun while it lasted, and many other artists and bands that have gotten sprinkled with Helen's fairy dust over the last 30 years have thrived. I am sure there will be many more to come.

Posted by Shaun Mullen at 4:44 AM
Email ThisBlogThis!Share to TwitterShare to FacebookShare to Pinterest