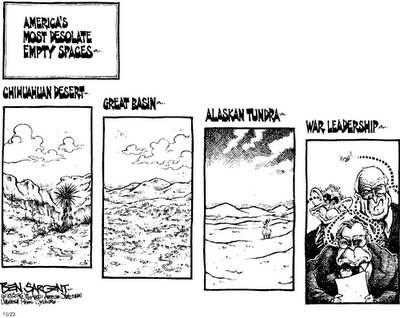 As The Decider again asserted that the U.S. was "staying the course" . . . er, plunging ahead in Iraq, an increasing number of Republicans worried about losing Congress are challenging him on the unpopular war two weeks before midterm elections.

"We're on the verge of chaos, and the current plan is not working."

Graham said U.S. and Iraqi officials should be held accountable for the lack of progress.

Senator John Warner of Virginia, chairman of the Senate Armed Services Committee, opened the floodgates earlier this month when he warned after a trip to Iraq that the war was "drifting sideways" and a course correction might be warranted.

Other Republicans who have spoken out are Senators Chuck Hagel of Nebraska and George Allen of Virginia, both of whom are presidential wannabes, and Senators Kay Bailey Hutchison of Texas, Conrad Burns of Montana, Lincoln Chafee of Rhode Island and Susan Collins and Olympic Snowe of Maine, as well as several House Republicans.

The Decider's effort to create an enduring Republican majority based on a bunch of right-wing crazies would appear to be on life support and may have the unintended consequence of driving many moderate Republicans into the arms of the Democrats.

E.J. Dionne notes this dynamic in a Washington Post column:

"This incipient Democratic alliance, while tilting slightly leftward, would plant its foundations firmly in the middle of the road, because its success depends on overwhelming support from moderate voters. That's why a Democratic victory in November -- defined as taking one or both houses of Congress -- would have effects far beyond a single election year.

"The Democrats' dependence on moderate voters and moderate candidates belies Republican claims that a Democratic victory would bring radically liberal politics to Washington. In fact, the first imperative of Democratic congressional leaders, if their party is successful, will be finding policies, ideas and rhetoric to allow the party's progressives and moderates to get along and govern effectively together.

"The strategy pursued by Bush and Karl Rove has frightened most of the political center into the arms of Democrats. Bush and Rove sought victory by building large turnouts among conservatives and cajoling just enough moderates the Republicans' way. But this approach created what may prove to be a fatal political disconnect: Adventurous policies designed to create enthusiasm on the right turned off a large number of less ideological voters."

Jack Abramoff, the disgraced Republican super lobbyist turned rat, has been so talkative that he's been given a desk to work at in the FBI.

"He spends up to four hours a day detailing his shady business to agents eager to nail more congressmen in the scandal. And when cooperative witnesses spend that much time inside, they get a desk. As a result of his help in the ever expanding investigation, we hear that the Feds hope to keep him in a nearby prison after he's sentenced on his conspiracy admission."