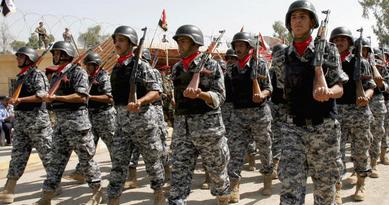 Oh when the Saints . . . er, Shiites come marching in

The devolution of Iraq from a semblance of stability after the invasion to civil war to a state of near anarchy has the Bush administration way back on its heels. An underlying reason that The Decider and his neocon cabal have made such a hash of things is that they have repeatedly confused tactics, strategies and goals, and military failures don't get much more fundamental than that.

Tactics are what you use to carry out your strategy to achieve your goal.

But just the other day you had a high ranking Pentagon official saying that the U.S. military would again have to change its strategy after the stunning failure of a second security sweep of Baghdad to do anything but increase the level of violence and death.

I suspect that it's way too late in the game, but what needs to change in this instance is the tactics being used to secure Baghdad in the service of a strategy already in place to secure neighborhoods by tamping down sectarian fighting in order to attain the ellusive but well intentioned goal of making the capital liveable again.

Meanwhile, the confusion was no where more obvious than in the news media.

For his part, the president said of where the U.S. stands in Iraq:

"Our goal has not changed. Our goal is a country that can defend, sustain and govern itself, a country that which will serve as an ally in this war. Our tactics are adjusting."

He was being disingenuous, of course, because the goal has changed, or been scaled back considerably. Conspicuous in its absence yesterday was a word that was once often on The Decider's lips -- democracy.

It should be noted that for their part, the insurgents have repeatedly adjusted their tactics in service of a strategy to keep U.S. troops off balance with the goal of getting them the hell out of Iraq.

It seems to be working.

IS AMARA A SIGN OF THINGS TO COME?
In a post yesterday comparing the and wars, I said that only an ass would try to predict the future of The Decider’s Excellent Adventure in .

But events on Friday in the southeastern city of may well be a portent – and a most unpleasant one -- that the fissures are now so deep in Iraqi society that elements of the same sects would rather fight one another than work together.

Amara is in , one of three that the British occupied after the March 2003 invasion and ostensibly pacified. But as British troops have withdrawn from the region, newly trained elements of the Iraqi Army have been ineffective in controlling the Mahdi Army, the militia of powerful Shiite cleric Moktada al-Sadr.

On Friday, about 800 members of the Mahdi Army battled police and members of a rival Badr Organization militia in Amara. They seized control of the eastern half of the city of 250,000 but withdrew after negotiations between representatives of the militia and the office of Prime Minister Nouri al-Maliki and control was turned over to an Iraqi Army battalion that had been dispatched from Basra.

At least 30 policemen and 20 civilians were killed.

The stability of Maliki’s government depends on a tenuous peace between Sadr, who controls one of the largest parties in the ruling Shiite bloc, and Abdul Aziz al-Hakim, who leads another, the Supreme Council for the Islamic Revolution in Iraq, and its private army, the Badr Organization.

Where was the British Army in all of this?

Sitting on its hands. Militias have gradually taken over Amara, and elections organized by the British produced a city council dominated by religious parties affiliated with militias. For more than a year now it has banned any official dealing with the Brits.