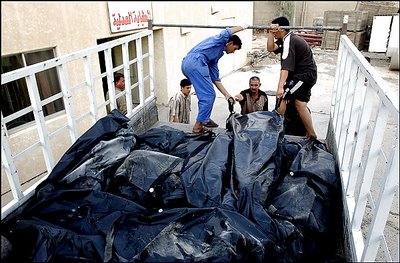 Morgue workers unload victims of a sectarian slaughter in Balad
One of the consequences of the descent of Iraq into near anarchy is that even moderate Iraqis are now seeking the protection of extremists.

I believe that most Iraqis welcomed the overthrow of Saddam Hussein. That most Iraqis find the terrorists and radical sectarians in their midst to be abhorrant. But what happened over the last two weeks in Balad, a Tigris River city north of Baghdad, is an example of what is occurring in Baghdad and throughout much of Iraq as civil order disintegrates three and a half years into the hapless American-led occupation:

Earlier this month, two or three Sunni men, one a local Al Qaeda leader, were killed in Balad by Shiites.

Following the beheadings, the Shiite elders of Balad phoned an office of powerful Shiite cleric Moqtada al-Sadr in Baghdad. They asked for protection and, I can only presume, revenge. Sadr leads the Mahdi Army, the most feared Shiite militia in Iraq.

The Kadhimiyah branch of the Madhi Army responded en masse.

Early the next day, loudspeakers on Shiite mosques in Balad broadcast warnings that all Sunnis were to leave within 48 hours. Shiite gunmen set up checkpoints at the edge of town, questioning the occupants of passing vehicles about whether they were Shiite or Sunni.

By Sunday, there were virtually no Sunnis left in Balad.

This footnote that speaks volumes about the power of militas and hatred with which U.S. and Iraqi troops are viewed:

Although there was a sizeable U.S. military presence nearby, they were not asked to intervene when it became obvious that a slaughter was underway. And it was only after the slaughter ended that the Iraqi government ordered a regiment into the city.

MALICE IN WONDERLAND
Pretend that the aforementioned slaughter in Balad and incidents like it never happened.

That's what U.S. commanders are doing in making the preposterous assertion that Iraqi security forces will be ready to take over from American troops in 12 to 18 months or so.

Note that that's what they said 18 months ago.

Note further that there was -- gasp! -- a blackout during the press conference at command headquarters in Baghdad. That's right, over three and a half years after the invasion there still isn't reliable electrical service even in the fricking Green Zone.

CLIMBING INTO BED WITH THE ENEMY?
U.S. commanders are negotiating an amnesty with Sunni insurgents to try to defuse the chaotic state of Iraq and pave the way for disarmament of Shiite militias, according to a story in The Times of London.

The Times says that:

"The tactic marks a dramatic reversal of policy by the U.S. military, which blocked attempts to pardon insurgents with American blood on their hands after handing over sovereignty to a secular Iraqi Government in June 2004. "The U-turn comes amid the bloodiest fighting for two years and growing domestic opposition to the war as Americans prepare to vote in crucial midterm elections.

"Even as President Bush convened emergency talks with his generals and national security advisers to review strategy in Iraq, commanders on the ground were negotiating a peace deal. Observers expect leaders of the Sunni insurgency to join a peace conference early next month."

(Photograph by Bassim Daham/The Associated Press)
Posted by Shaun Mullen at 4:53 AM
Email ThisBlogThis!Share to TwitterShare to FacebookShare to Pinterest

Promises, lies, and spins: they're running outta pitches. The bases are loaded and they're throwing pitch-outs. End game is near.

Yup. No extra innings for these clowns.