Iraq IV: Yes, Virginia, There Is a Civil War 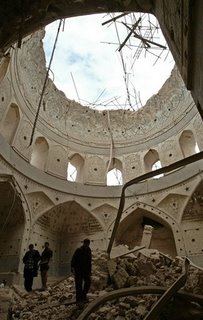 James Fearon is an expert on civil wars and ethnic conflicts. He recently testified before a House of Representatives Subcommittee on National Security about what he unambiguously believes is a civil war in Iraq.

Still don't believe there's a civil war? You need to see your doctor about changing your medication.

"The historical record on civil war suggests that [U.S.] strategy is highly unlikely to succeed, whether the U.S. stays in Iraq for six more months or six more years (or more)." (Emphasis his.)

Fearon further notes that civil wars typically last a long time and on average post-1945 civil wars have lasted a decade. And when they end, it's usually with decisive military victories and not successful power-sharing agreements.

ANOTHER BLOODY MILESTONE
The U.S. death toll in Iraq in October reached 100 on Sunday when a U.S. Marine was killed in western Anbar province.

The month is the deadliest since January 2005 when 107 U.S. troops were killed. The highest monthly toll was in November 2004 when 137 deaths were recorded.

QUOTE DU JOUR ON THE WAR
Anthony Shahid from the Iraqi capital in the Washington Post:

"It had been almost a year since I was in the Iraqi capital, where I worked as a reporter in the days of Saddam Hussein, the U.S.-led invasion in 2003, and the occupation, guerrilla war and religious resurgence that followed. On my return, it was difficult to grasp how atomized and violent the 1,250-year-old city has become. Even on the worst days, I had always found Baghdad's most redeeming quality to be its resilience, a tenacious refusal among people I met over three years to surrender to the chaos unleashed when the Americans arrived. That resilience is gone, overwhelmed by civil war, anarchy or whatever term could possibly fit. Baghdad now is convulsed by hatred, paralyzed by suspicion; fear has forced many to leave. Carnage its rhythm and despair its mantra, the capital, it seems, no longer embraces life."

Posted by Shaun Mullen at 2:23 AM
Email ThisBlogThis!Share to TwitterShare to FacebookShare to Pinterest