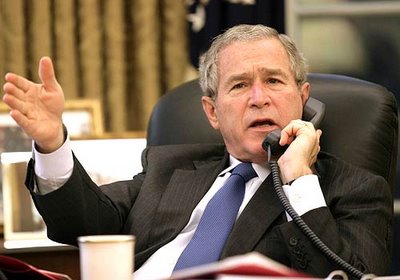 "Al, old pal, I just wanted you to know that the check is in the mail"
Chris Floyd reprises JFK's famous admonition that if a politician asks if there's anything he can do for you "that means you're dead" in suggesting that Iraqi Prime Minister Nouri al-Maliki's days are numbered.

Floyd, jumping on the bandwagon with the growing number of people who believe that a U.S.-engineered coup is coming, writes at Empire Burlesque that the surest sign yet that Al-Maliki will be toast is the showy "if there's anything I can do for you" telephone call that The Decider made to Baghdad this week in the presence of reporters and photographers.

"The chief reason why Maliki and his government will be ousted is not the hell-storn of death and violence that is now devouring the country. The fact that every new day sees a hundred or more mutilated bodies dumped on the nation's streets, and pitched battles between sectarian militias, and multiple deaths of American troops, and mass flights of anguished Iraqi civilians running in fear for their lives is not a matter of any urgent concern to Bush and his warmakers. . . .

"No, what will likely bring on the coup is the December deadline for crafting a new oil law, which was imposed on Iraq by the International Monetary Fund, as part of the deal to write off some – but by no means all – of the nation's crushing debt. Given the current level of intense anti-American feeling in Iraq, and the overwhelming majority support among every sector of society for ending the occupation, and the overwhelming belief among Iraqis that the chief reason behind the invasion was to steal their oil, it is almost inconceivable that Maliki will be able to sign the new law, which essentially opens up Iraq's oil wealth to decades of despoliation by U.S. and European energy conglomerates. The Maliki government – already weak, incompetent and despised, as are all puppet regimes – could not possibly survive the political backlash that such a move would provoke."

(Photograph by Eric Draper/The Associated Press)
Posted by Shaun Mullen at 2:54 AM
Email ThisBlogThis!Share to TwitterShare to FacebookShare to Pinterest