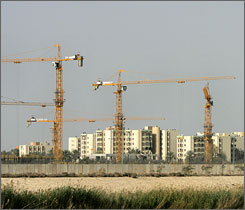 If your Outrage Index is not sufficiently high, then take a bite out of this rotten apple:

The palatial new U.S. Embassy in Baghdad's Green Zone is being constructed by migrant workers from the Phillipines, India, Pakistan and other poor South Asian countries who earn as little as $10 to $30 a day.

Because they can be treated like shit. Besides which, the Kuwaiti contractor building the embassy won't hire Iraqi workers because they are considered a security headache.

Incidentally, the embassy will cost nearly $600 million before it is completed.

IT'S THE OVERHEAD, STUPID
Meanwhile, the New York Times reports that overhead costs have consumed more than half the budget of some reconstruction projects in Iraq, leaving far less money than expected to provide the oil, water and electricity needed to improve the lives of Iraqis.

The highest proportion of overhead was incurred in oil-facility contracts won by KBR Inc., the Halliburton subsidiary formerly known as Kellogg Brown & Root, which has frequently been challenged by critics in Congress and elsewhere. Vice President Cheney was CEO of Halliburton prior to the 2000 election.

(Hat tip to Will Bunch at Attytood.)
Posted by Shaun Mullen at 1:39 AM
Email ThisBlogThis!Share to TwitterShare to FacebookShare to Pinterest