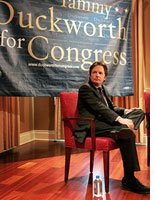 There's the candidate who said she'd punch her opponent if he wasn't confined to a wheelchair. And the candidate who accused his opponent, who lost both legs as a helicopter pilot in Iraq, of wanting to "cut and run" from the war.

Then there are the people who say that actor Michael J. Fox is faking it in a TV commercial that criticizes Republican candidates for fighting stem-cell research that could potentially cure Parkinson's disease.

The poignant ad, running in three markets where Democrats are locked in tight races with anti-stem cell research Republicans, shows the boyish actor writhing uncontrollably and unable to stop his body or voice from quaking.

"Stem-cell research offers hope to millions of Americans with diseases like diabetes, Alzheimer's and Parkinson's," Fox says in the ad. "But George Bush and [fill in opponent's name here] would put limits on the most promising stem-cell research."

Conservative radio talk show host Rush Limbaugh, who knows a thing or two about drugs and emoting, led the charge against Fox, whom he said was "either off his medication or acting" during the spots.

(Limbaugh's modus operandi is to apologize after the damage is done. He later did so, but only up to a point, explaining that he was sorry if Fox wasn't acting, but he was still a Democratic shill.)

I happen to know a thing or three about Parkinson's. My mother was diagnosed about four years before her death from an even more horrible degenerative neurological disease called supranuclear palsy.

The ad is painful to watch because Mom displayed exactly the same symptoms that Fox does and I made sure she took her medications.

The people who claim that Fox intentionally went off his meds so he would be even more herky jerky are idiots. Parkinson meds build up in effectiveness over time and stopping them for a while is not going to have an immediate and noticeable impact.

As Kevin Drum notes, the whining from conservative Republicans over the ad is a sign of weekness considering that they've almost always been the source of hardball advertising. In no time at all, the ad has become the most viewed video on the Internet.

As Your Faithful Correspondent notes, the controversy over the ad is a gift for the Democrats for whom Fox did the spot. It moves the focus from abortion and other issues where Republicans have some traction with voters to stem cell research, which poll after poll show a large majority of Americans favor.

More here and here.
Posted by Shaun Mullen at 3:31 AM
Email ThisBlogThis!Share to TwitterShare to FacebookShare to Pinterest