Iraq II: Buddy, Can You Spare an Option? 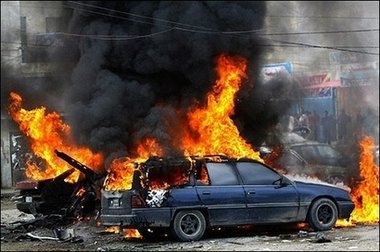 With the descent of Iraq into anarchy, there are few good options and and plenty of bad ones these days.

The two most talked about options -- a coup d'état and breaking up Iraq into sectarian regions -- are indicative of how terrible things are in a country where there is a palpable sense that the breaking point has been reached.

The central government has pretty much lost its always tenuous grip on power and the U.S. military has been unable to stanch the epidemic of murders and kidnappings, which in Baghdad have grown worse despite a much heralded security sweep.

THE COUP OPTION
The purpose of a coup d'état would be to install a so-called government of national salvation that would impose martial law. I have difficulty taking this option seriously since no one seems to be able to agree on anything in Iraq, let alone on cracking down on cracking down.

David Ignatius reports in the Washington Post that a prominent Sunni politician, Saleh al-Mutlak, visited Arab capitals over the summer and promoted the idea of a national salvation government. Top Iraqi intelligence service officials also have discussed a plan in which Prime Minister Nouri al-Maliki would step aside in favor of a five-man ruling commission that would suspend parliament, declare martial law and call back some officers of the old Iraqi army.

"Frustration with Maliki's Shiite-led government is strongest among Iraq's Sunni minority, which dominated the old regime of Saddam Hussein. But as sectarian violence has increased, the disillusionment has spread to some prominent Shiite and Kurdish politicians as well. Some are said to support the juntalike commission, which would represent the country's main factions and include former interim prime minister Ayad Allawi -- still seen by some Iraqis as a potential "strongman" who could pull the country back from the brink."

Older Iraqis are no strangers to coups. There was one in 1958 that overthrew the monarchy and another in 1968 that brought the Baath Party, and subsequently Saddam, to power.


The federalization of Iraq into sectarian regions would essentially dismember the country. Partitioning seems less improbable (how about that double negative?) than a coup, and last week the Shiite-dominated parliament passed a law allowing the formation of federal regions despite opposition from Sunni lawmakers and some Shiites.

The federalism law sets up a system for allowing provinces to join together into autonomous regions that would hold considerable self-rule powers, a right given to them under the constitution adopted last year in a national referendum. The law includes a provision that regions cannot be formed for another 18 months, a concession to Sunni concerns, which were heightened on Sunday with the with the slaughter of at least 80 people in Balad.

Some Shiites want to create an autonomous zone in their heartland in the south, much like the self-ruling Kurdish region in northern Iraq.

But Sunnis adamantly oppose the federalism measures, fearing it will divide Iraq into sectarian mini-states, giving Shiite and Kurds control over oil riches in the south and north, and leaving Sunnis in an impoverished central zone without resources. Some Shiite parties also oppose the measures for nationalistic reasons.

My big problem with partition is that Al Qaeda and other terrorists could operate with impunity in the already lawless Sunni Triangle, which is smack dab in the middle of the country. Now what good would that do?

THE GET THE FUCK OUT OPTION


General Richard Dannatt, head of the British Army, uttered the obvious the other day in saying that the presence of foreign troops in Iraq was making it less secure, while Ignatius notes there are two forthcoming opportunities to light a fire under troop withdrawals:

* A December deadline for renewal of the U.N. legal mandate for coalition forces in Iraq.

Prime Minister Al-Maliki has been dragging his feet in seeking formal approval for continued occupation because that might be what it takes to propel Iraq past that breaking point, but the deadline does provides backdrop for negotiations over a phased U.S. troop withdrawal.

* A report due from James Baker's Iraq Study Group.

The former secretary of state's task force, formed to find alternatives to the Bush administration's failed Iraq policy, is expected to endorse a troop withdrawal plan that would begin sooner rather than later, and perhaps the federalism option, as well. Some pundits are saying than an Iraq "solution" will be presented as part of a comprehensive Mideast peace plan. I'll believe that when I see it. More here.

A RUSH TO THE EXITS
John Warner and Chuck Hagel, two prominent Republican senators, formally broke ranks with the White House on Sunday and called for a new strategy on Iraq.

"You can see some movement forward, but a lot of movement back. We have to rethink all the options, except any option which says we precipitously pull out, which would let that country fall into a certain civil war at that time, and all of the neighboring countries would be destabilized."

More here.
Posted by Shaun Mullen at 1:03 AM
Email ThisBlogThis!Share to TwitterShare to FacebookShare to Pinterest