Iraq: Update on Death by the Numbers 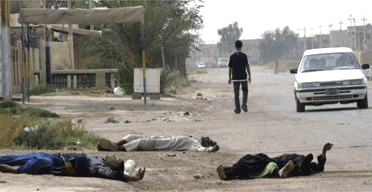 The Shiite family members pictured above, their bodies strewn across a road in Baquba, waited too long to be included in the controversial new study that concluded 655,000 Iraqis have died in the three-and-a-half-year old war. Besides which, if the entire family was killed, there would have been no one for researchers to interview and their deaths would not have been counted.

No matter, the proverbial has really hit the fan in the right-wing tar pits over the study. Herewith a sampling of comments from four reality-impaired cowards who are unable to understand what a catastrophe a war that they so slavishly support has become:

Gateway Pundit, who suspends belief only when it's a conservative that is baying at the moon:

"If 770 extra people were dying in Iraq every day, why don't we hear about them on the news?"

MedPundit, who needs to see a doctor about his anger-management problem:

"Sure the study's methodology is standard for public health resesarch. But don't forget that the public health is a leftwing plot."

Lazy-assed Aussie blogger Tim Blair, who hasn't had an original thought this millennium:

"These statisticians say that you can take a small sample from a large population and learn a lot about the population. As if. I'll believe those 665,000 Iraqis are dead when they tell me so."

"I just know the study's wrong, but I can't figure out how."

I provided my own take on the study yesterday, noting that I had gone from skeptical to pretty much convinced once I actually read an article in The Lancet on the study (something that few of the right-wing moonbats seem to have bothered to do) and the methodology used, which you too can do here in a few simple mouse clicks.

So I'm done jousting over percentage points, cluster sampling, the veracity of peer-reviewed journals, whether Bill Clinton is to blame for this too, and so on.

This leaves me with one wee piece of advice for people who don't believe that 655,000 Iraqis could have been killed in The Decider's Excellent Adventure in Mesopotamia:

U.N. sanctions in the 10 years before the U.S.-led invasion are estimated to have resulted in the deaths of 750,000 to 1 million Iraqis without a shot being fired.

On top of all that there has been a war in a country of 26 million people involving U.S.-led coalition forces using state-of-the-art killing machines, as well as the Iraqi military, Iraqi national police, Iraqi local police, irregulars, insurgents and sectarian militias.

Didja know that the civilian mortality rate was four times higher in some countries during World War II than the rate in the Iraq study? Didja know that civilian casualties have always been underreported in wars?

Put all of the above together and all of a sudden the figure of 40,000 to 45,000 Iraqi civilian deaths based on earlier surveys that count only news media-reported deaths seems puny.

Denial is not a river in Egypt. Nor in Iraq.

Armed conflict is a brutal thing and this one is far from being over. If you're a right-wing apologist, get used to it. Or better still, shut your yap hole unless you can look yourself in the mirror and perhaps even figure out a way to help end the war.

(Hat tip to Lindsay Beyerstein at Majikthise)
(Photograph by Helmiy al-Azawi of Reuters)
Posted by Shaun Mullen at 2:14 AM
Email ThisBlogThis!Share to TwitterShare to FacebookShare to Pinterest

Didja know that the civilian population of Iraq is about 26 million?

Where did you get

I stand corrected and an edited version of the post reflects that. Thank you.