Iraq: Time to Step Up to the Plate. Or Not. 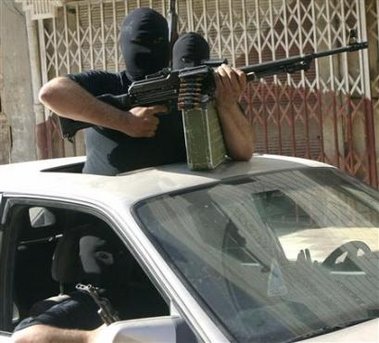 Insurgents sell magazine subscriptions door to door in Ramadi
And so in the seventh month of the fourth year of a war that the Iraqi people never wanted, the Bush administration is putting its big foot down. Thunk!

It is fed up with the Baghdad government for not jumping fast enough and high enough when Washington clicks its heels.

This dressing down will come in the form of a timetable for Prime Minister Nouri al-Maliki to get his house in order by taking a larger security role and addressing the sectarian divisions that have brough Iraqi to a state of near anarchy.

What will happen if Al-Maliki doesn't deliver?

According an article in the New York Times, the result a "reassessment” of the American strategy in Iraq. Duh-oh.

What strategy would that be?

Fighting the wrong war at the wrong time in the wrong place, an action so profligate that it will be judged as the single most crackpot foreign policy decision in American history?

Fighting a war in the most volatile region in the world without international support?

Fighting a war on the cheap without nearly enough troops and a battlefield plan that failed to take into account what these troops actually would encounter?

All but ignoring post-invasion planning, which made it probable that Iraq would descend into chaos?

In fairness, Al-Maliki and the Iraqi government do not get a free pass, but I keep coming back to the ugly reality that it is being asked "to step up to the plate," to use White House parlance, when it never asked to play in a game that has torn the country asunder, in many cases along centuries old sectarian fault lines.

WHEN THE TRUTH HURTS
Kevin Drum wonders over at Political Animal whether the whole timetable bit is "political theater" or a way to not have to embrace the forthcoming recommendations of James Baker's Iraq Study Group, which would seem to offer the president cover for finding a way out of Iraq.

"I wonder how long it will take America to recover from George Bush's uniquely blinkered and self-righteous brand of ineptitude? In the past five years he's demonstrated to the world that we don't know how to win a modern guerrilla war. He's demonstrated that we don't understand even the basics of waging a propaganda war. He's demonstrated that other countries don't need to pay any attention to our threats. He's demonstrated that we're good at talking tough and sending troops into battle, but otherwise clueless about using the levers of statecraft in the service of our own interests. If he had set out to willfully and deliberately expose our weaknesses to the world and undermine our strengths, he couldn't have done more to cripple America's power and influence in the world. Beneath the bluster, he's done more to weaken our national security than any president since World War II.

"So how long will it take — after George Bush has left office — for our power and influence on the world stage to return to the level it was at in 2001? When I'm in a good mood, I figure five years. Realistically, ten years is probably more like it. And when I'm in a bad mood? Don't ask. It's really all very depressing."

WHEN THE TRUTH REALLY HURTS
A senior U.S. State Department diplomat told the Arab satellite network Al Jazeera that there is a strong possibility history will show the U.S. displayed "arrogance" and "stupidity" in its handling of the Iraq war.

Alberto Fernandez, director of the Office of Press and Public Diplomacy in the Bureau of Near East Affairs, said that:

"History will decide what role the United States played. And God willing, we tried to do our best in Iraq.

"But I think there is a big possibility . . . for extreme criticism and because undoubtedly there was arrogance and stupidity from the United States in Iraq."

The White House said that it could only assume that Fernandez's remarks had been mistranslated, and about 48 hours after the furor broke, he apologized for being a bad boy.

Will Condi wash his mouth out with soap?

(Photograph by Reuters)
Posted by Shaun Mullen at 5:06 AM
Email ThisBlogThis!Share to TwitterShare to FacebookShare to Pinterest