Is the Way Out of Iraq Through A Dayton Accords? 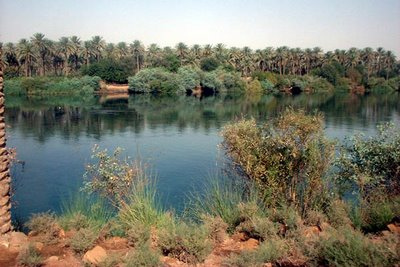 Imagine an Iraq where people have a chance to die of old age
I'll give Greg Djerejian credit. He doesn't merely ask questions, he looks for answers. In a lengthy post at his flail-free Belgravia Dispatch, he argues that the way out of the deepening catastrophe in Iraq may be something akin to the Dayton Accords that ended the fighting in Bosnia-Herzegovina in November 1995.

My initial reaction was to blow off the idea. Just getting the warring parties to stop shooting is going to be tough enough. Getting them to sit down and be . . . well, diplomatic, would seem to be impossible.

But out of desperation more than anything, I kept being drawn back to his idea and I believe it's worth (pardon the term) a shot.

Djerejian lays out differences and similarities between Bosnia and Iraq that in and of themselves provide a perspective of why giving peace a chance won't work and might work.


"First, Iraq is not Bosnia. It is even worse, with European Enlightenment values having touched Bosnia to some extent, but with Iraq firmly a pre-Enlightenment society at a different stage of historical development. The furies unleashed, as we’re seeing with dozens of bodies turning up with drill-holes in them, vie with the most grotesque war crimes of Ratko Mladic and Radovan Karadzic.

"Second, the parties haven’t exhausted themselves to the same extent through long years of civil war bloodshed. While the wars have lasted roughly the same amount of time (Bosnia ’92-’95; Iraq 2003-2006--and counting), the civil war in Iraq is only beginning in earnest now.

"Third, the corollaries in the Shi’a, Sunni and Kurdish communities to Franjo Tudjman (the Croatian leader), Slobodan Milosevic (who could bring the Bosnian Serbs in line) and Alija Izetbegovic/Haris Silajdzic are less evident in Iraq. Who is the key Shi’a? Is it Maliki? Is it Jafari? Is it Sistani? Sadr? . . . In short, there are not two or three key players to deal with to get tangible, immediate results, as there were at Dayton, and so the situation is more fluid and complicated."

"The previous strategies had failed in the former Yugoslavia. So-called 'lift and strike' was never really employed in Bosnia, genocidal actions stalked Europe again only 50 years after the Holocaust with events like the fall of Srebrenica, diplomacy and UNPROFOR proved dismal failures.

"In Iraq, we are facing a similar grim reality. Our strategy has mostly failed. While US forces in theater (freed from the gross missteps of Rumsfeld’s arrogant hubris that defined the ’03-’04 period) are making occasional, tentative, and localized progress, they still lack the resources to effectively pursue a top-down nation-wide ‘clear-hold-build’ effort. They are still rotating troops from Anbar to Baghdad, and back again, and so on.

"And on the diplomatic front, our approach to the neighborhood has been characterized by gross amateurism, or laziness, or both. Last, our feeble interventions at bolstering the Maliki government have proved fruitless and no amount of 'the next three months will be critical' utterances among the blow-dried commentariat-class making the rounds on Meet the Press are going to change that."

HOW TO PULL IT OFF?
Djerejian says that there must be a continued major U.S. troop presence while diplomacy is pursued, otherwise civil war is inevitable. (I would argue that Iraq has been in a low-level civil war since the bombing of the Golden Mosque in February.)

Anyhow, he concludes that:

"[T]he key will be to gain greater international support, whether diplomatic, economic or military, use the confederation process to attempt to de-radicalize many Shi’a, not least so as to free up resources to deal with the most hardened Sunni elements, keeping in mind too that the Sunni will have the biggest stake in seeing the re-integration process per an Iraq Dayton-style process ultimately bear fruit, so will ideally gradually become more aligned with international aims for the country."

Djerejian welcomes comments, so have at it.
Posted by Shaun Mullen at 2:55 AM
Email ThisBlogThis!Share to TwitterShare to FacebookShare to Pinterest