It's Still the Economy, Stupid 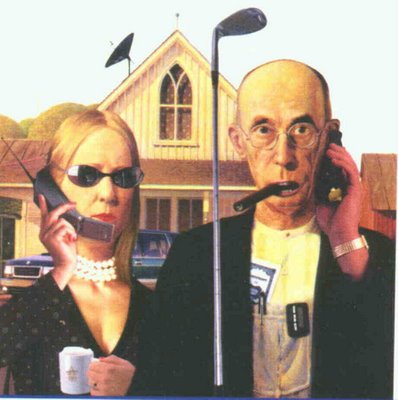 Jane and Joe Sixpack: Working more and making less
There may be no greater disconnect in society today than the boom on Wall Street and the bust on .

The Dow Jones Industrial Average is at a record high, the economy shows steady growth, productivity is up and corporate profits are robust. CNBC’s Larry Kudlow calls this dynamic a Goldilocks Economy -- “not too hot and not too cold.”

But out on the hustings, Jane and Joe Sixpack must wonder what the heck Kudlow and other economic talking heads are smoking. The Sixpacks and other Main Street Americans are doing with less, there are a record number of home foreclosures and bankruptcies, health-care and education costs are going through the roof, and once sacrosanct pension plans are collapsing. The drop in gasoline prices from record highs has offered some relief, but is temporary.

And curiously, with few exceptions (President Bush being the most conspicuous one) Republicans are not campaigning on the economy despite its surface sheen. This may be because disenchantment over the war in Iraq has become disenchantment with the Bush administration and Republicans in general.

Why such a dramatic disconnect?

The short answer is that several long-term economic trends that hurt families like the Sixpacks have accelerated over six years of a presidential administration that has determinedly cosseted the rich, ignored the poor and robbed the middle class.

One pair of statistics speaks volumes: The median hourly wage has risen a little less than 10 percent in the last 25 years while productivity has grown by more than 70 percent. And the less you make the bigger the disparity is.

This makes living the American dream – owning a home, sending the kids to college and having decent health-care insurance – substantially more difficult for the Sixpacks than it was a generation ago.

For the first time since forever, a majority of American don’t believe the next generation will be better off.

The long answer is more complicated:

The upshot is that the rich get richer, feeding those spectacular Wall Street numbers, and almost everyone else gets poorer. The boom that Kudlow and his fellow travelers babble on about is passing the Sixpack family by. Jane and Joe have no money to invest, let alone put away for a rainy day, and like many other Americans they are running up record credit card debt.

* The notion that giving tax breaks to the rich is good because the money that they make will trickle down to the Sixpacks is grossly overstated.

The stagnation of middle-class wages, which peaked in the 1970s and the overall long-term trend of growing economic inequality put the lie to that. Anybody who thinks that a few cents from every dollar that Donald Trump spends ends up in the Sixpacks’ pockets is being naïve.

* Some luxuries have become necessities.

The Sixpacks must have a second car, a PC and a laptop and cell phones for themselves and their two and a half children.

* Employers are cutting back on benefits.

These range from health insurance to pension funds to day care subsidies to commuting-related expenses. Low-income workers rarely have any benefits, but folks like the Sixpacks had no choice but to pay out of pocket when their once comprehensive health-insurance coverage morphed into a plan with substantial co-pays. So it is painful whenever Joe needs to refill his blood pressure medication prescription and Jane needs another round of drugs to try to keep her breast cancer in remission.

I can think of no one thing that would begin to address the disconnect between Wall Street and more than a comprehensive overhaul of health care at the national level.

This, in one fell swoop, would improve the economic health (if not the literal health) of the Sixpacks and other American families more than anything else, including income-tax reform.

* spends far more for health care per capita than any other first world country, but like Jane and Joe Sickpack, er . . . Sixpack, they're not particularly healthy people. In fact, a recent survey found that older Brits are healthier than older Americans although the spends twice as much on health care as the

* Nearly 45 million Americans have no health-care insurance. A surprisingly large minority of this group are technically not poor.

* The last major effort at national health-care reform was a disaster. (I was present at the train wreck. Click here for more.)

Yes, pharmaceutical and insurance companies will have a disproportionately powerful voice in any discussion about fixing health care and will be formidable obstacles to meaningful reform. Yes, reforming health care is the biggest third-rail issue in politics. No matter how you approach it and no matter how you want to fix it, you're going to get shocked.

But health care can be fixed, and if the Democrats do well in the mid-term election, there’s a faint chance that can begin to happen, probably by embracing a version of the Massachusetts reform plan.

The Sixpacks hope and pray that they succeed.