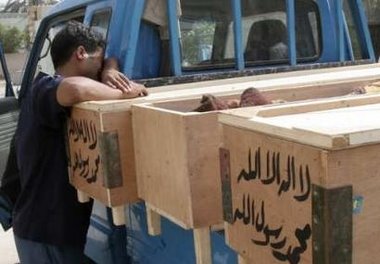 The response in the Iraqi blogosphere to the controversial new study that concludes 655,000 Iraqi civilians have been killed in the war has been muted.

There was an angry blast from Omar at Iraq the Model (Earth to Omar: You're being used), but most bloggers let this big news pass with nary a comment.

I may be presumptious in saying so, a big reason has to be that most Iraqi bloggers are eking out an existence amid a horrific conflict now three and a half years old that gets worse by the month. There is no light at the end of this particular tunnel, and being told that over 600,000 of your countrymen have been iced because of The Decider's Most Excellent Adventure in Mesopotamia has to be awful.

But Zeyad, a terrific blogger at Healing Iraq who is in the U.S. and out of harms way for a while, has plenty to say about the study and does so in perceptive and admirably dispassionate terms.

"One problem is that the people dismissing – or in some cases, rabidly attacking – the results of this study, including governmental officials who, arguably, have an interest in doing so, have offered no other alternative or not even a counter estimate. This is called denial. When you have no hard facts to discredit a scientific study, or worse, if you are forced to resort to absurd arguments, such as 'the Iraqis are lying,' or 'they interviewed insurgents,' or 'the timing to publish this study was to affect American elections,' or 'I don't like the results and they don't fit into my world view, therefore they have to be false,' it is better for you to just shut up. From the short time I have been here, I am realising that some Americans have a hard time accepting facts that fly against their political persuasions.

"Now I am aware that the study is being used here by both sides of the argument in the context of domestic American politics, and that pains me. As if it is different for Iraqis whether 50,000 Iraqis were killed as a result of the war or 600,000. The bottom line is that there is a steady increase in civilian deaths, that the health system is rapidly deteriorating, and that things are clearly not going in the right direction. The people who conducted the survey should be commended for attempting to find out, with the limited methods they had available. On the other hand, the people who are attacking them come across as indifferent to the suffering of Iraqis, especially when they have made no obvious effort to provide a more accurate body count. In fact, it looks like they are reluctant to do this.

"By the way, these same statistical methods were used to count civilians deaths in Darfur, but then I didn’t see anyone objecting to that."

Incidentally, while taking well-aimed shots at the deniers, Zeyad disputes the 655,000 death figure. He says a more reasonable number is about half that.

* * * * *
(If you haven't read The Lancet article on the study and you care about the fate of Omar, Zeyad and their countryfolk anywhere near as much as we do at Kiko's House, you owe it to yourself to do so. Click here for a pdf version.

(Photograph by Reuters)
Posted by Shaun Mullen at 5:56 AM
Email ThisBlogThis!Share to TwitterShare to FacebookShare to Pinterest