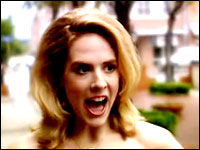 The Republican National Committee has been forced to pull an anti-Harold Ford TV commercial in Tennessee that was so obviously racist that even Bob Corker, Ford's opponent, had disavowed it.

Or maybe it hasn't pulled it. There are conflicting reports.

In the ad, a white woman with blonde hair and bare shoulders looks into the camera and whispers, ''Harold, call me,'' and then winks -- an implicit appeal to racial fears about black men and white women if there ever was one.

As one pundit noted, the ad makes the infamous Willie Horton ad "seem like child's play."

As you may have gathered, Ford is black and is trying to become the first black elected to the Senate from the South since Reconstruction.

More here and here. You can see the ad here, although the blonde doesn't appear until a few seconds into it.
Posted by Shaun Mullen at 3:29 AM
Email ThisBlogThis!Share to TwitterShare to FacebookShare to Pinterest