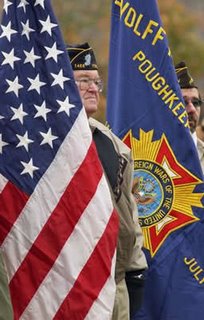 Major hostilities of World War I were formally ended at the 11th hour of the 11th day of the 11th month of 1918 with the German signing of the Armistice. Veterans Day was first commemorated as Armistice Day by President Wilson in 1919, and many states subsequently made it a legal holiday. Congress passed a resolution in 1926 inviting all Americans to observe the day, and made it a legal holiday nationwide in 1938.
Posted by Shaun Mullen at 1:02 AM
Email ThisBlogThis!Share to TwitterShare to FacebookShare to Pinterest