Iraq II: Backwards Into the Future 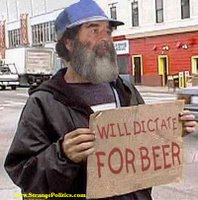 It is a sad commentary on how flubbed up things have become in Iraq that Tom Chartier's humorous solutions to the Mess in Mesopotamia actually make some sense.

Chartier played lead guitar in legendary Los Angeles punk band The Rotters and has been chilling -- and blogging -- in the Caribbean since the band broke up. (It's a tough job but somebody has to do it.)

His solutions, which are addressed to The Decider:

* Acknowledge that you didn't invade Iraq to protect the U.S. because if that had been your intention you wouldn't have let Osama bin Laden go.

* Since you knew that Saddam Hussein had no WMDs, rule out that excuse.

trying to liberate the Iraqi people, who don't want anything to do with democracy because they hate Americans for their freedoms.

But Chartier's biggest solution is to give Iraq back to Saddam:

"It’s probably the worst thing you could ever do to him! Stick him with the mess! Pull out all troops and then get Tony Snow to do some of that spinning of the facts. Get Disney to make a 'doculie' TV movie. No more American soldiers will get wasted. One of Osama’s big rallying cries to kill the American infidels will fizzle out because the won’t be occupiers anymore! And with the short-term memory of the American public it will all be forgotten as soon as the Super Bowl rolls around! I’m pulling for The New Orleans Saints, how about you?"

Posted by Shaun Mullen at 1:42 AM
Email ThisBlogThis!Share to TwitterShare to FacebookShare to Pinterest